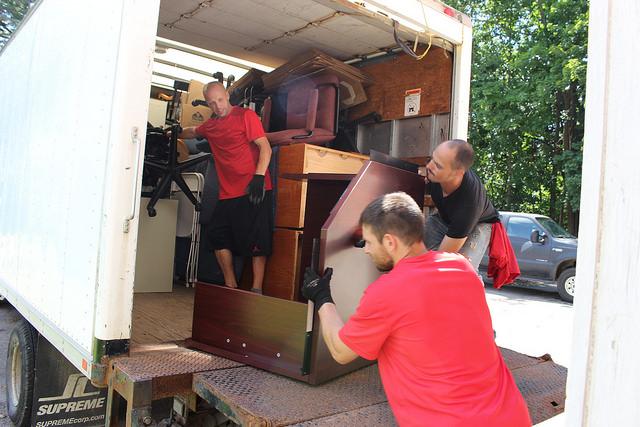 Bob Suddarth, Marvin Alvarado and Gregory Bores, of At A Boy Moving Labor Services, work to move professors offices out of the 585 House on North Main Street on Wednesday, Aug. 24, 2016. The house is scheduled to house 29 first-year women.

The Office of Residence Life decided to convert the house into a residential space in July, according to Jennifer Foxman, assistant dean of students and director of residence life.

The SAE house, which will now be known as the 585 House, is still owned by the fraternity.

“It is not a long-term thing,” Foxman said. “We are currently leasing the house from the fraternity.”

The house has not housed SAE since 2013, after two members were arrested for ordering drugs over the internet and having it delivered to an off-campus house. A search of the fraternity owned North Main Street house turned up further drug paraphernalia.

Following the incident, the Pennsylvania Omega Alumni House Corporation and Alumni Commission voted to suspend the chapter, saying in a statement its decision was the result of a string of troubling incidents with the fraternity in the past.

The fraternity’s suspension was to be effective until this semester. However, the fraternity must petition the board of trustees to return to campus. No request has been submitted according to Jayne Piskorik, associate director of the office of student involvement.

Since the fraternity was suspended, the college has leased the house and used it primarily as office space. This summer, with renovations underway on Carnegie Hall, professors’ offices were moved into the house. Foxman said they are currently in the process of moving the last of the professors out and making the space ready for student housing.

“If you go from an office space to a residence hall, there is a little work that needs to be done,” said Gretchen Kerr, associate director of residence life.

Kerr said the transition has mostly involved getting furniture into the rooms and making small repairs.

Cliff Willis, director of Physical Plant, said he was informed that the house would be made into first-year housing in July.

“There wasn’t much to do, so we did some touch-ups and cleaned,” Willis said.

Willis said the biggest task was moving the professors’ offices out and bringing in furniture for the rooms. He said they also had to bring in a washer and dryer for the roughly 30 residents who will live in the building.

The first floor will include a laundry room and lounge, with rooms being on the second and third floors.

Rooms, according to Willis, will consist of quads and doubles. Quads will have one central living space with two bedrooms, each with two students sleeping in bunk beds built into the wall.

Doubles will have a similar central living space with one bedroom, also with bunk beds.

Foxman said the decision to make the house entirely first-year housing was largely a matter of timing. She said  when the decision was made to use the space for housing, all returning students had already been housed.

“To make [housing] shifts in July, that would have been a nightmare,” Foxman said.

The other factor that came into play, according to Foxman, was the requests of the fraternity.

“Honestly, we were trying to respect the wishes of the fraternity not to have upperclass students in there,” Foxman said.

Both Foxman and Kerr said working with the organization has been pleasant as it considers its next step at Allegheny.

“I think they are hoping to make a positive re-entrance into the community,” Foxman said.

According to Foxman, 29 students are scheduled to live in the building.

At the end of last semester, the college announced Edwards Hall would also be an all first-year living option. Foxman said they have heard feedback from students that living in a small first-year community can be beneficial.

“I think for some students it helps with the transition and we have gotten feedback from people saying it is helpful,” she said.

With an incoming class of approximately 580 students, Foxman said a little over half will live in first-year housing.

Correction: An earlier version of this article identified the house that SAE members had drugs mailed to as a fraternity-owned house. It was an off-campus house. Updated Aug. 26, 2015 at 3:10 p.m.