Smith: A man I highly respected was my football coach in college [and] my mentor. I truly wanted to follow in his footsteps after he taught me a lot about life from his job. From his being coach I learned that I could affect a lot of kids.

Smith: The mentoring. Getting to talk kids through tough times. I’ve been a coach for going on three to four years now and I’ve talked kids through everything from ‘I’m having a kid’ to ‘failing out a class, my parents are mad at me.’ It’s great getting to be an influence on those kids in a positive way, especially when a lot of them don’t have positive influences in their life.

Campus: What are you looking forward to this season?

Smith: The first win, by far. I’m coming into a program that’s had a little bit of a down turn and definitely looking to show what we’ve accomplished and where we’re going to take the program, and the first win will be the stamp on that.

Campus: Why did you choose to come to Allegheny?

Smith: Family. I’ve known Portia for six or seven years now. She was my assistant athletic director at Lake Forest [College] where I played, and I knew what type of program Allegheny was with her at the helm from before I even got here. I’d heard a lot of great things about the college itself, and when I got here and did my interview, it was a lot of family atmosphere; it was other coaches communicating and talking and a lot of places you don’t have coaches intermingling.

Campus: How long have you been playing football?

Campus: What do you think are the benefits of playing DIII?

Smith: The biggest thing is that you aren’t overlooked, you’re part of a family, part of a community. When you get into larger programs, usually it’s you’re the face of the program or you’re in the background. Here the face of the program is the entire program. When one football player does something great, it reflects on everybody. When one football player does something bad, it reflects on everybody. And it’s a great experience for the kids to be able to not only be an athlete ,but be in academics and be more than just one thing. They get to learn a lot about life outside of just football. That’s why I played DIII. 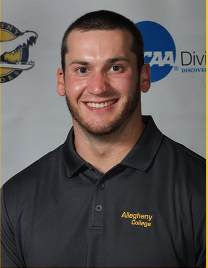 Rosenstein: It was in my family; my grandpa was a basketball coach and my dad was a football coach, and I was at his practices since I was a little kid so I kind of grew up with that lifestyle. And I finished up college, finished my career and then my love for the sport didn’t go away.

Rosenstein: It’s a lot of fun, but I would have to say interacting with the kids in general and watching them become successful athletes but more importantly successful people, whether that’s because you play a vital role in that or a small role, either way knowing you impact their lives.

Campus: What are your goals for the season?

Rosenstein: As a team the ultimate goal is to win the conference, get as good as we can. My personal goal is to get my group of throwers new PRs [personal records], good distances and hopefully send a few of them to nationals.

Campus: Why did you decide to come to Allegheny?

Rosenstein: The reputation. This is my first real job so I was excited about an interview. But I came because of the good reputation the school has for academics and athletics, overall a good fit for myself and I like the kids that I’ll be working with.

Campus: How long have you been involved in track events?

Rosenstein: [I’ve been] competing since middle school. I got into it because of football. All my football coaches were the track coaches and they talked me into coming out for them and to have fun with it. So I did and ended up being pretty decent at it. I got a decent scholarship coming out of high school, then competed for four years at Bloomsburg [University] and one year during grad school.

Campus: What do you think are the benefits of DIII?

Rosenstein: Less pressure overall. As you get higher up with scholarships and higher expectations, this has less pressure. The competition is more suitable for kids like this who have high academics because they already have all this pressure from being at a high academic institution, and they don’t have to worry about if they do something wrong that their scholarship will be taken away.

Linzy: When I was about a junior in college and every time I went home, I would volunteer coach for the summertime with the middle school football team that I played for coming up as a kid. That was kind of my a-ha moment, I helped a kid out who was playing the quarterback position and taught him a little technique and he ended up getting an interception and that was pretty cool.

Linzy: The impact on the lives. Oftentimes coaches, no matter what level you play at, play more of a role than just coach and athlete, sometimes it’s a father figure role, sometimes it’s counselor, sometimes it’s teacher, just the ability to impact someone’s life in a positive way is really what this profession is about. I always tell people, if in my coaching career, I get invites to weddings then I know I’ve done my job watching people create those milestones in their lives.

Campus: What are you looking forward to this year?

Linzy: The opportunity to be here. I’m excited to be here. I think Allegheny College is a place where athletes can explore their academic potential, and it’s unique in the sense that you can also take full advantage of the opportunity to be very competitive in this conference. Not only do we care about academics, we care about winning in athletics, and that’s what we call an unusual combination in coaching. I am very fortunate to be at an institution that cares so much about different aspects of what it means to be a student here.

Campus: What do you think are the benefits of playing DIII?