Alumnus finds diverse work at The Chronicle of Philanthropy 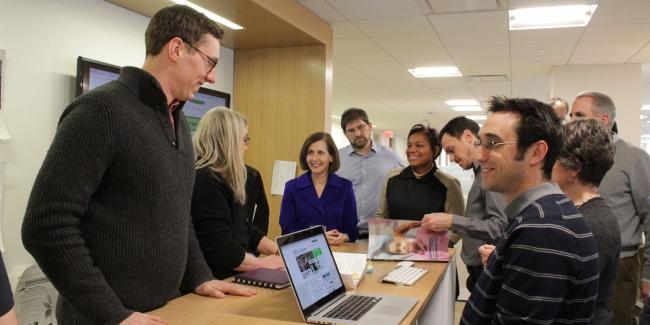 Cody Switzer, ’07, works with his colleagues to put the finishing touches on The Chronicle of Philanthropy’s print and online reinvention in February 2015.

Cody Switzer, ’07,  always knew he wanted to work in the field of journalism. He began writing for The Campus newspaper his freshmen year. Switzer said having access to the newsroom was easy, as it was located at the end of his hallway in Baldwin Hall.

“I wanted to write and help people, and journalism is kind of the thing that does that,” Switzer said.

At the college, Switzer worked his way through various positions on The Campus, including staff writer, sports editor and news editor. In his senior year, he filled the position of editor-in-chief.

Switzer said he learned the most at Allegheny outside of the classroom, and that he enjoyed his time as a student.

“I loved Allegheny. I had a great four years there. Met a lot of my friends there, met my wife there. It was a pretty transitional time there,” Switzer said.

Professor of Communication Arts and Theatre Michael Keeley remembers having Switzer as a student. He said Switzer worked as a teaching assistant in the production studio.

“He was a very nice student with a good sense of humor, and I really enjoyed working with him,” Keeley said.

Despite the fun Keeley remembers Switzer bringing to the classroom, Keeley said Switzer was studious and worked hard to enhance both his knowledge of production and his performance as a journalist.

“He was very serious about his work,” Keeley said. “He was really looking forward on how things were changing. I think that helped him with his first job.”

Switzer worked with the former Meadville Bureau of Erie Times-News as a freelance writer while in college. After he graduated, he said he stayed at Erie Times-News for another two years.

During this time, Switzer said he covered one of his favorite stories.

“When I was in Erie, I had this five-part series. For five straight Saturdays I wrote this series on French Creek with Jack Hanrahan. We walked or drove or canoed all of French Creek,” Switzer said.

Switzer said this involved covering the industry and social issues around French Creek, and he liked the thoroughness of the story.

Following this work, Switzer moved to the District of Columbia in the summer of 2009 with his then-fiancee, whom he later married.

Switzer spent a little more than a year doing online communications for Goodwill Industries International, during which a friend of his started working for the Chronicle of Philanthropy. He moved to its web communications team when a spot opened up. At The Chronicle, he held the positions of assistant web editor, web editor and senior web editor before becoming the assistant managing editor and director of digital products. According to Switzer, there is no easy way to narrow down what his job entails.

“I’ve never had a job where I’ve just done one thing. Even at the Times-News when I was reporting and interning, I was also working on the website and social media and video,” Switzer said.

Switzer said he enjoys having a job that can vary.

“I’m interested in doing a lot of different things all the time, so when there’s something new, I’m often the one to raise my hand and try it,” Switzer said.

Switzer’s supervisor, Ken Sands, is the online general manager. His position covers The Chronicle of Higher Education and The Chronicle of Philanthropy. Sands also said that Switzer exhibits particular excitement for new projects. 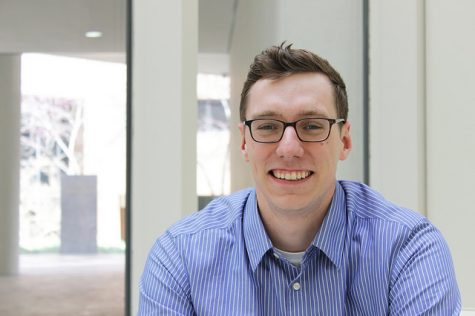 “Cody was probably one of the first people I met in 2013 when I came here. He’s one of those bright enthusiastic people,” Sands said. “He brings a lot of what I call digital IQ, which is really important for companies today.”

Sands said that Switzer is not only enthusiastic about different areas of work, but he thrives in a number of them as well.

“He’s very collaborative, which means he works well across departments in the company,” Sands said. “So even though he came up as a journalist working in the newsroom, he is able to collaborate and work with people with marketing and…development, and of course keeping the journalism ethics number one.”

Switzer attributed his enthusiasm for new projects in part to his time taking any number of different stories while working at the Erie Times-News, and his time as a liberal arts student at Allegheny.

“The variety is one of the things I like best now,” Switzer said. “Any given day I might be working with reports, or working with people who are in our business department.”

Switzer’s favorite project while at The Chronicle of Philanthropy focused on people who make their money through the internet. He also compared how people now and in previous generations view their philanthropy.

Switzer said that Allegheny helped to prepare him for his professional career because he got to try different types of media.

“Allegheny gave me the chance to try things outside of traditional journalism,” Switzer said. “One of the things that [employers] really wanted was video experience.”

Sands said that Switzer has given the college a positive reputation in his view.

“He’s a tremendous representative of all things good from [Allegheny],” Sands said.