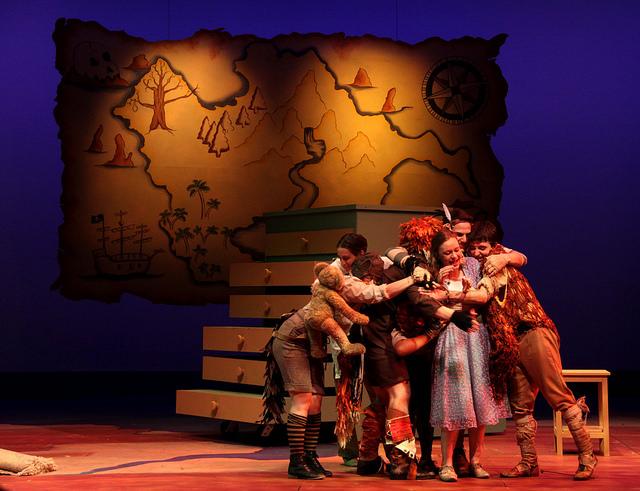 Peter Pan, played by Luke Davis, ’16, and the Lost Boys rejoice for their new mother Wendy, played by Emily Wilson, ’19, at dress rehearsal on Wednesday, April 20, 2016.

The Playshop Theatre held its first spring performance of “Peter Pan and Wendy” on Thursday, April 21 and will continue on Friday, April 22 at 7:30 p.m. in the Gladys Mullenix Black Theatre in the Vukovich Center for Communication Arts.  There will be matinee performances on Saturday, April 23 and Sunday, April 24 at 2:30 p.m.

While the story of Peter Pan is a well known Disney classic, this adaptation of the story, written by Doug Rand was selected by the play’s director, Beth Watkins, professor of communication arts and theatre, because of the way it forces the audience and cast to use their imagination.

According to a press release Watkins said that although the play is recognized by many, the cast will tell the story by putting their own spin on it by using movement, music and other unexpected twists, while also incorporating the plot the audience knows and loves.

“I chose this particular adaptation because I like the framing device of story-theater,” Watkins said. “Movement is implied many times in the script: flying, swimming, climbing, walking the plank, running and swordplay/fighting. In our production, characters will ‘fly’ through imaginative means—not on wires, as in the Mary Martin version of the play, but via rolling nursery beds, falling from the sky and being elevated by other actors.”

The cast is made up of 16 students as well as a large crew.  Lee Small, ’16, is a member of the backstage crew.  Small helps to keep props organized and change the set between scenes.  Altogether there are eight scenes and seven set changes.

“I’ve never really done a lot of back stage crew. It’s always been doing board [operations] or building the sets so I got to learn more about what goes on behind prop managing and scene changes. That’s all stuff I’ve never touched before,” Small said.  “It was just cool because I was like ‘Oh I get to learn a whole other side of theater I’ve never done before.’”

Small said that there is also a lot of intertwining between the cast and crew.  He said that often times the cast will help move around set pieces during scene changes and there is a point during the play where he is on-stage.

Chloe Spadafora, ’18, plays Tootles, the lost boy and said that this adapted version of the play will not be what the audience expects it to be.  Puppets take the place of many characters featured in the Disney movie including the part of Tinkerbell and Tiger Lily, and pivotal points in the plot now incorporate music.

“While our production has elements of music, it doesn’t adhere to the classic movie in the sense that it’s a musical,” Spadafora said. “We ask that the audience suspend their disbelief and allow their imagination to take over during the play.”

Watkins, Spadafora and Small all said the play allows both the cast and audience to be an adolescent again.  The cast has really made each character their own, according to Spadafora.

“Being able to become childlike again is so amazing, we honestly just play on stage,” Spadafora said.  “The lost boys have developed a silly, playful rapport as well, which allows us to constantly be energized and connected to each other.”

Spadafora said that the challenges of the performance stem from the fact that the audience will have specific expectations when coming into a storyline they are already familiar.

“Undertaking such a well known and beloved show is always a little challenging because you want to live up to people’s expectations of the show while also creating your own production with your own character experiences,” Spadafora said.

Watkins said that the play is an experience that appeals to all ages and while also portraying an exciting adventure fueled by a childlike imagination.