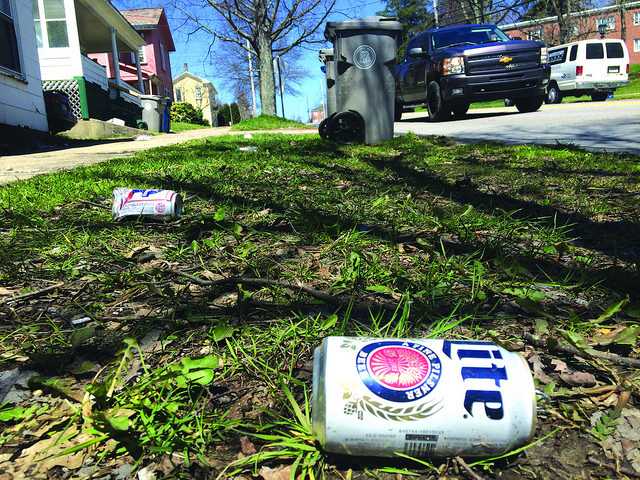 Beer cans litter the side of Park Avenue on Thursday, April 14, 2016, following Springfest activities the weekend prior.

Meadville City Police responded on April 9, 2016 to an altercation near 306 Prospect St., which is owned by the college. According to Police Chief Eric Young, Eduardo Anaya, a student at Allegheny College, was taken into custody and charged with one count of aggravated assault, one count of simple assault and one count of harassment.

Young said the bottle caused “bodily harm” to the individual. He said Anaya has been transported to Crawford County Jail, where bail was set at $25,000.

Interim Director of Safety and Security Sean Kennedy confirmed a Meadville Police investigation is underway, but declined to comment further, saying he did not want to impede the investigation.

Joseph Hall, director of student conduct and development said no one has been suspended or expelled from the college regarding the incident, but declined to comment any further. He said in cases such as this, an investigation is conducted during which interim measures can be taken.

“[The measures] could be being away from campus for a while, it could be no contact orders [or] other restrictions from using campus facilities,” Hall said.

Hall confirmed interim actions have been taken in this case, but declined to elaborate further. He said the college’s investigation will include interviews with pertinent witnesses and the student under investigation will also be given a chance to speak and answer questions Hall said.

According to Hall the college’s investigation will also be entirely independent.

“It is two separate processes. Our decisions aren’t based on the police investigations,” Hall said.

Dean of Students Kimberly Ferguson also declined to comment on the grounds that the investigation by police is ongoing. She said the college works to ensure that its student are safe at all times.

Kennedy spoke to Allegheny Student Government on Tuesday, April 12, about Springfest, during which the incident occurred. He said overall he is pleased with how Springfest was handled.

“The Springfest I thought went very well and it was a great event generally speaking,” Kennedy said.

Kennedy said he was pleased with the performance of his department during the week of Springfest, and its ability work with other organizations.

“Overall, I think it went very well collaborating with ourselves and Meadville Police,” Kennedy said.

The arrest on Prospect Street was not the sole incident during Springfest. On Sunday, April 10,  a timely warning email was sent out regarding an incident on Highland Street where a student was restrained by two unidentified men who went through his pockets.

“The victim reported that the assailants found no cash and fled the scene leaving the victim unharmed,” the email read in part.

Kennedy explained at the ASG meeting that timely warning emails are federally mandated by the Jeanne Clery Disclosure of Campus Security Policy and Campus Crime Statistics Act. He said it is his job to ensure that his department continues to be as transparent as possible.

“My job is to open up the department,” Kennedy said.

Kennedy, whose contract has now been extended until June, when a new director will be hired, said he has worked extensively with students to improve security on campus. He said part of that has been addressing lighting issues on campus. According to Kennedy, checking the status of lighting on campus is now part of the officers’ on-duty rounds.

“As of now, while on shift, officers check all the lights,” Kennedy said.

Among some of the new initiatives Kennedy has implemented are monthly tests of all campus call boxes, which he said are now all illuminated, making them far more visible than in the past.

While these new initiatives will help with campus safety, Kennedy said the basic safety protocols are ultimately the most effective. He said looking out for fellow students and reporting suspicious activity are the easiest ways to prevent security incidents on campus.

“It’s a safe place, but we can make it better,” Kennedy said.