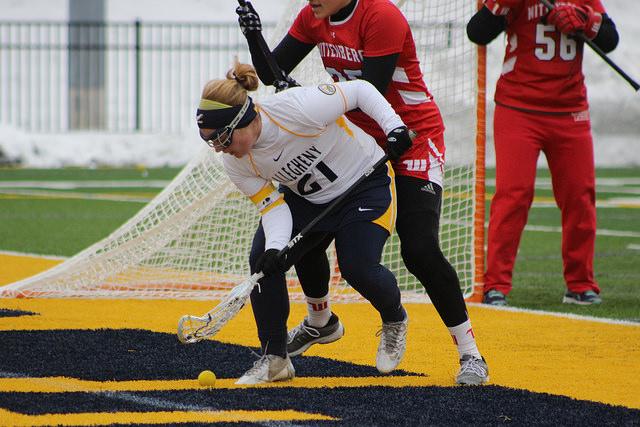 McKenzie Bell, ’16, goes for a ground ball in the game against Wittenberg University on Sunday, April 10, 2016. This season, Bell broke the point record on March 23 and was named NCAC Player of the Week on April 10.

Since sixth grade, senior McKenzie Bell has played lacrosse, finishing her final season on the field this year.

“My middle school started a team, and it was something new to try that a bunch of my friends were also doing,” Bell said.

Bell chose to play lacrosse at Allegheny following a visit to campus and meeting with the team.

“When I visited here, the team was really open and inviting, along with the way they interacted with each other and the coaches all came together with the academics,” Bell said.

This season, Bell broke the Allegheny record for career points on March 23 in the team’s game against St. Lawrence University and was named NCAC Player of the Week on April 10.

“I thought it more spoke to the teammates that I’ve had for my four seasons. Most of them are assist points so it’s not really all me,” Bell said. “I knew I was close, but I didn’t know that I was going to hit it that day.”

“I was happy for her,” said Christina Perez, ’16. “She is someone that doesn’t let her accomplishments go to her head, and I was proud of her hard work paying off.”

Hughes said the record break was a special moment for the program as well.

“In about 10 years we’ve had three or four people break that points record and what that tells me is that the program is continuing to grow so that every person that breaks the record, it’s one more step towards the program finding that elite level of success,” Hughes said. “For [Bell], it’s something that she’s worked towards for quite a while and making sure she’s continuing to focus on all aspects of her game.”

In addition to scoring on her own, Bell also opens up opportunities for teammates to reach the net, Hughes said.

“We’re very fortunate this year to have multiple goal scorers. In the last game we had seven different goal scorers in the [14] goals against Wittenberg, but what McKenzie has the ability to do is create that sense of heightened awareness for the defense as to where she is so it frees up some of those other people,” Hughes said.

Bell and Perez met through lacrosse their freshman year and have been roommates since.

“I’ve learned a lot from her. She’s the first person I’d go to for help,” Perez said. “Playing together has made us better friends, and we understand each other and support each other off the field as well.”

Perez said Bell is a strong leader for the team, and when she gets pumped up for something the team dynamic shifts and everyone else gets excited as well.

“My teammates help me a lot. I get a little wound up sometimes so it helps to have everyone there to help me relax, especially the other seniors that I’ve been playing with for a while,” Bell said.

Bell wants to leave a legacy as being someone who always put the team first and did everything she could to help the program move forward.

“McKenzie’s leadership has been one of the strongest things she’s had so far,” Hughes said. “Leadership…not just being a positive example on the field and off the field but also having the deep passion for the team. She’s one of the people that would do anything for this family. On the field I think she’ll be remembered as someone that always had a poetic way of playing.”

In the remainder of the season, Hughes is looking forward to spending more time with the team and creating memories on the way to games.

“If we have a strong weekend this weekend against OWU and DePauw we put ourselves in a very good place to not just seal playoffs but also work towards home field advantage, which would only be the third time in our history,” Hughes said.

This weekend the Gators will face the DePauw University Tigers on April 16 at 12 p.m. in Greencastle, Indiana and Ohio Wesleyan University on April 17 at 1 p.m. in Delaware, Ohio.