ASG selects RJ Mitte for Gator of the Year 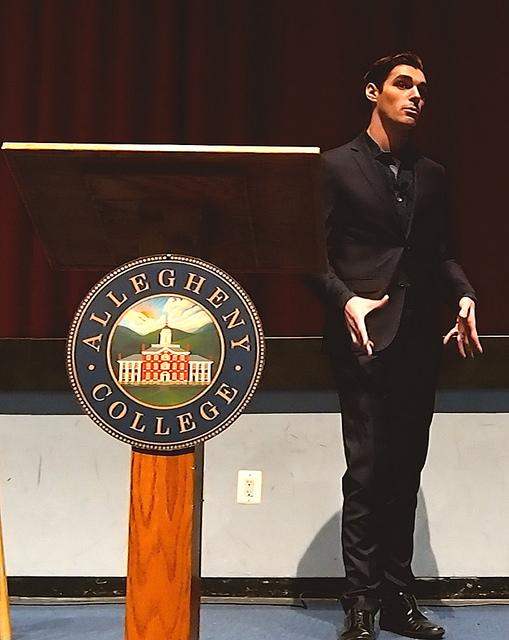 RJ Mitte, selected as the 2016 Gator of the Year, visited Allegheny College on Wednesday, April 6, 2015 to speak about living with a disability and his career.

Allegheny Student Government selected RJ Mitte, best known for his role as Walter White Jr. on the television show “Breaking Bad,” as the Gator of the Year for 2016. He spoke in Shafer Auditorium on Wednesday, April 5.

Mitte, born Roy Frank Mitte III, travels for a cumulative 10 months of the year to do speaking events at various locations. Born with cerebral palsy, Mitte spoke about living with the disability as well as how he got his start in the television industry.

ASG President Haley Riley, ’16, said that the Gator of the Year is always a high profile speaker.

“[They’re] chosen for their activism or notoriety through which they embody the ideals presented in our statement of community,” Riley said.

ASG Chief of Staff Sofia Kaufman, ’17, said ASG selected Mitte to support Allegheny’s statement of community, which is the college’s promise to create “an inclusive, respectful and safe residential learning community that will actively confront…harassment and discrimination,” according to the Allegheny website.

“I think it’s important to have people speaking on these issues. In keeping with our statement of community, there needs to be more awareness of the issues,” Kaufman said.

One of the biggest themes of Mitte’s speech was the importance of always striving toward self-improvement. His public speaking was one way in which he hoped to grow as a person.

“I do quite a bit of public speaking. This started as a way to get me more comfortable with crowds,” Mitte said.

Mitte said that the greatest obstacles people generally face are weaknesses in their own personality traits, and it is their responsibility to growfrom them.

“My obstacles, I find, definitely vary, none of them involving my disability,” Mitte said.

“I really liked how…he said kind of that everyone has a disability, whether mental or physical,” Donnelly said. “And that he defined a disability as anything that stops you from being who you’re supposed to be.”

Mitte said that the best way to get through obstacles is to be willing to step out of your own comfort zone and fight for what you want no matter what. He said it is best not to let other people push their fears onto you.

“I think the biggest thing that people can walk away with…is that you don’t have to accept what’s happening,” Mitte said. “There are a lot of people in this world who feel helpless. They accept that fate.”

When it comes to disability being portrayed in the media, Mitte said that there are mixed results. According to Mitte, the problem often lies in characters who are entirely defined by their disability.

“You shouldn’t need to highlight anything about a disability. You should just show someone as they are,” Mitte said. “People are very visual creatures. When we see something, we immediately judge it.”

Mitte’s character on “Breaking Bad” also had cerebral palsy, and Mitte said viewers likely recognized Walt Jr. by his crutches first, and then by his actual character. After becoming familiar with him, the viewers would have known Walt Jr. by who he was, not the crutches he used.