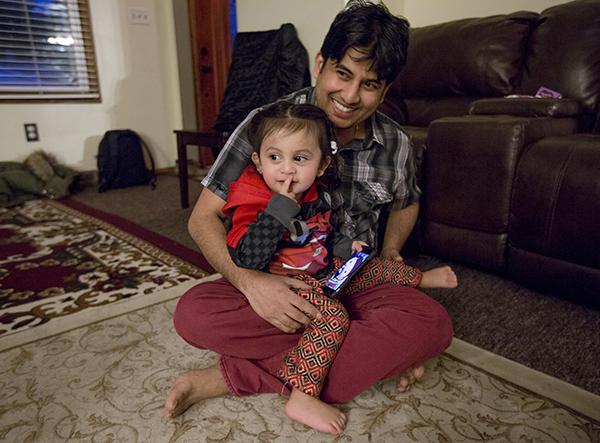 Tika Timsina, 32, holds his son, Adarsh Timsina, inside their home in Erie, Pennsylvania.

Bhargabi Timsina, 29, and her husband, Tika Timsina, 32, reside in Erie, Pennsylvania with their two children, Zenith, 5, and 19-month-old Adarsh.

Bhargabi came to the United States in 2010 as a Bhutanese refugee when she was 24 years old. The greatest difficulty she faced when first coming to the states was the language barrier, which worried her.

“I tried to explain to somebody at the time that I was pregnant. They do not understand.”

But after a year of English as a Second Language classes, she learned how to speak the language.

Growing up in Nepal, Bhargabi experienced a different kind of childhood than that of her own children.

She is thankful that her kids were born in the United States and are able to have toys.

In December of 2015, Bhargabi and Tika were granted citizenship after being in the United States for five years.

She now spends her time at home taking care of her young children.