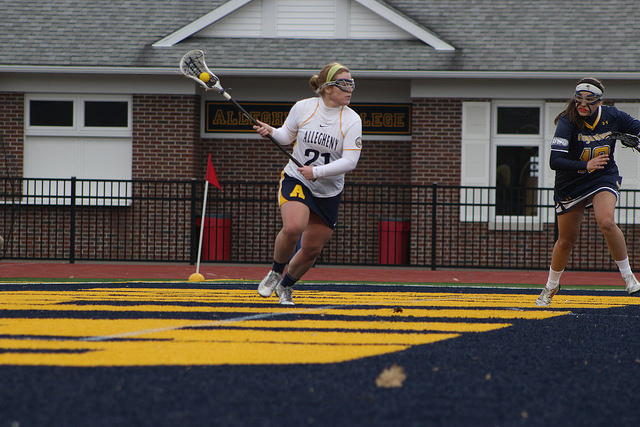 McKenzie Bell, ’16, attack, looks for a teammate to pass to during the women’s lacrosse game against Augustana College on Tuesday, March 1, 2016. The Gators fell 9-8 to the Vikings in their first game of the season.

The Allegheny women’s lacrosse team started out the 2016 season with a 9-8 loss to Augustana College on Tuesday, March 1.

“Our energy was awesome and I’m proud of how we played our first game,” said Alexa Maloney, ’17, attack. “The biggest challenge was not having had a scrimmage beforehand and getting out the kinks.”

Head Coach Ashley Hughes said the biggest highlight of the Augustana game was the team’s mental focus and toughness.

“After [the game], I think it really inspired me, just watching them and seeing how last year we sometimes put our heads down when we faced a challenge but last night they came together and they proved that they didn’t want to stop fighting, and little by little we fought back,” Hughes said.

Midfielder Alex Zielinski, ’19, scored her first goal for the Gators, starting a series of goals for the Gators following. Shelby Piper, ’18, attack, scored a game-high of four goals, followed by seniors McKenzie Bell, Anna Doten and Gusty Mead each scoring one for the Gators.

“Our biggest challenge is always going to be that we are facing teams that for the most part are faster than us and more athletic than us,” Hughes said. “We overcome that by playing as a team and doing all the little things right, I think sometimes having that heart and motivation can overcome some shortcoming we may have when it comes to athletic ability.”

Though the women faced challenges in their first game, they are looking to improve and achieve season goals.

“Our goal is always to win the conference tournament and get a bid to the NCAA tournament,” Bell said. “We want to come together on and off the field, the season isn’t all about winning but also being friends.”

Hughes said the team is looking to find success, in whatever form that comes.

“We’re looking for the off the field camaraderie, that family environment, doing well in the classroom, getting involved on campus and in the community, but also still looking for that first ever conference championship win,” Hughes said.

With winning a conference title on the horizon, the women are preparing for NCAC play to begin after spring break.

Maloney said the tough schedule allows the team to play at a higher level and grow more.

“I’m looking forward to making memories to last for classes after us, we want to leave a legacy that starts today,” Bell said.

Maloney said she is looking forward to playing as a family and beating the College of Wooster and Denison University.

“This year we really understand the concept of family and playing for the good of the team,” Maloney said. “Our motto this year is ubuntu: I am because we are.”

The team has seen a change this year in attitude and game mentality.

“After last season and seeing what a talented group we had, but we didn’t necessarily see the results that we were hoping for, we came back this year, maybe not totally mentally or physically ready in the fall, but something clicked in the fall that they realized we need to earn every minute,” Hughes said.

The Gators will face Frostburg State University in Maryland on Saturday, March 5 at 4 p.m.