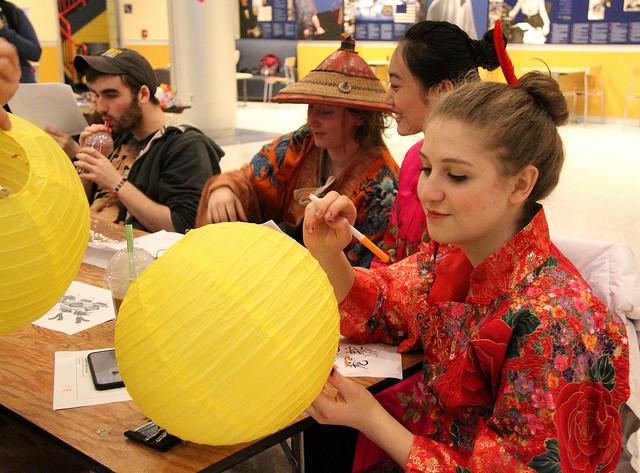 Hannah Firestone, ‘19, decorates one of the paper lanterns available on the many tables set up for the Chinese Lantern Festival in the Campus Center lobby on Sunday, Feb. 21, 2016.

The Lantern Festival was once celebrated only in Chinese culture when it was first established more than 2,000 years ago. The event traditionally ends the Chinese New Year period and this year the festival fell on Monday, Feb. 22.

At Allegheny College, the Lantern Festival was celebrated on Sunday, Feb. 21 in the Campus Center. The event was organized by the Department of Modern and Classical Languages with help from the Association for Asian and Asian American Awareness, also known as A5. Mainly student organized and run, the event was about a time of celebration and reunion with family and friends, as is traditionally the understanding of the holiday.

“Last year we had the Mid-Autumn Festival, which the planning was pretty similar to this,” said Jennie Choi, ’17, president of A5. “Rogina [Chen, Chinese teaching assistant] asked Asian international students to volunteer talents and skills and whatever they could offer to perform. So there were dance performances, instrumental performances and what not.”

The festival is one of the most important holidays of the year for those who celebrate it, along with the Mid-Autumn Festival. These gatherings include traditional and modern celebrations. Traditional aspects of the holiday include foods such as rice cakes, dumplings and tangyuan, all of which have large symbolic meanings in the festivals. According to Chen, the round rice bars that were also at the event signify family and reunion.

The style of the parties and the artistic performances show how a modern spin has developed throughout the past 2,000 years. Student performances included music, dancing and a Japanese student performed martial arts and broke bricks with his hand. Victor Zheng, ’17, an international student from China, performed a modern dance piece on stage.

“We don’t have the chance to spend time with our family but we spend [time] with our friends, which is a good substitute,” Zheng said. “It helps to release the homesick.”

The event was not just an occasion for celebration, but it was also a place of learning. According to Xiaoling Shi, assistant professor of modern and classical languages, at one point a student from Vietnam taught her how they celebrate the Lantern Festival in their country. The celebration also brought awareness to domestic students who watched as their peers celebrated their culture.

“We have a relatively small population of Chinese students, so we decided we wanted to gradually include students from Asia, including Japan, South Korea, Vietnam and other Asian countries so that we can be together,” Shi said.