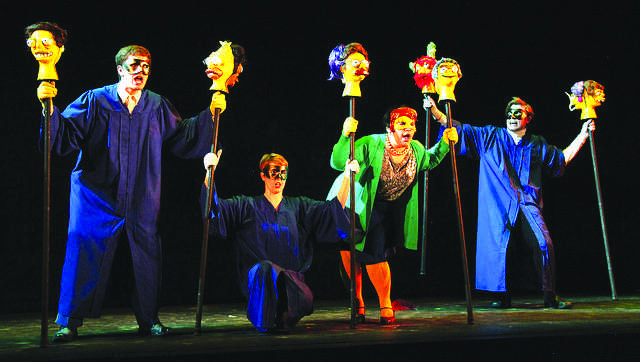 For the next three days, post apocalyptic survivors will double as Simpsons characters in a theater company after a nuclear fallout.

The running of “Mr. Burns,” a rapidly popularizing comedy written by Anne Washburn, kicked off in the Gladys Mullenix Black Theatre on Thursday, Feb. 25.

The “Mr. Burns” plot is rooted in post-apocalyptic United States, in a world where nuclear power plants have gone haywire and extinguished a large amount of the population. The play’s characters are a group of survivors who, in an effort to distract from their dire reality, turn towards focusing on easier, funnier times watching “The Simpsons.”

Within “Mr. Burns,” Bolan Marshall-Hallmark, ’17, dawns the moniker of “The Simpson’s” most notable character, Homer.

“This is my first show with them,” Marshall-Hallmark said. “I play a guy named Matt Lewis. He’s sort of a nerd. I turn into Homer as the play goes forward. You watch as this post-apocalyptic crew transforms into a theater company.”

The peculiarity of the workings of the play is a central feature of the enthusiasm of those involved.

“It’s definitely the most bizarre play that I’ve ever read, but it’s a lot of fun.” Marshall-Hallmark said.

“[The play is] phenomenally off the wall and wacky. It’s truly entertaining to see a show that combines “The Simpsons,” a nuclear apocalypse, early 2000’s pop punk music and a Greek tragedy,” Robertson said.

The production is under the direction of Mark Cosdon, associate professor of communication arts/theatre.

“‘Mr. Burns’ is a play about the apocalypse, the primacy of storytelling, environmental catastrophe, the immediacy  of technology and the fall of civilization as we know it,” Cosdon said.

Cosdon lead the effort of bringing “Mr. Burns” to the Allegheny stage.

“I elected that I would direct it approximately a year ago, in February or March of 2015,” Cosden said. “I wanted to challenge a company of student performers with a piece that blew me away.

“It made sense in terms of our season that ‘Mr. Burns’ would be a good piece that would provoke both our audiences and give our student performers something…really pretty significant to work on.”

Though “Mr. Burns” is a tall order, Cosdon is confident with his disposal of talent for the performance, noting his previous experience with the cast involved.

“It’s a company with eight performers, and that’s supplemented by about 15 folks who are working backstage and in the booth,” Cosdon said. “And then I have a student choreographer, whose name is Leah Kelly, and Aimee Reash is the music director. So they’re my colleagues that I work with consistently.”

“I think that audiences will be blown away by what my Playshop colleague Myriam Patterson and her student design teams have done in terms of the costumes and masks for ‘Mr. Burns,’” Cosdon said.

He also noted the work done by a special guest designer, Patrick Rizzotti, who has been involved with Allegheny Playshop Theatre previously.

“We’re also joined for this particular production by a professional, New York, designer, whose name is Patrick Rizzotti. He’s a designer who we’ve worked with before. He was with us in the spring of 2013 when he designed ‘The Foreigner.’ It’s nice to welcome Patrick back to campus. As you’ll see, for ‘Mr. Burns’ his stage design is pretty fantastic.”

All signs point to a measured, artful, off-the-wall performance that should be anything but ordinary.