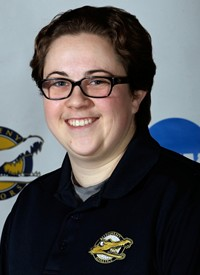 As the women’s lacrosse team prepares for its upcoming season, Erin McGaffigan is welcomed as the new assistant coach. Both the coaching staff and team are excited to see what McGaffigan brings to the table after spending the past year coaching lacrosse in Germany. She was hired to coach at Allegheny in August 2015.

A 2011 graduate of Norwich University, McGaffigan received her Bachelor of Science degree in nursing. While attending Norwich, she played on the women’s lacrosse team where she split her time between goaltender and attack for the Cadets.

McGaffigan believes that the skills she learned from pursuing her nursing degree have helped her learn how to communicate effectively, a skill that she utilizes when coaching.

“[My degree] opened my eyes to the differences in people and I learned how to communicate effectively.” McGaffigan said.

When McGaffigan started playing lacrosse during her first year of college, she saw it as an opportunity to play a spring sport. Since then, lacrosse has provided her with a career and numerous opportunities.

“[Lacrosse] has not only become a career, but it took me across the ocean,” McGaffigan said.

In 2013 and 2014, McGaffigan helped the Fitchburg State University Falcons earn consecutive Massachusetts State Collegiate Athletic Conference semifinal spots. After spending three seasons as an assistant coach at Fitchburg, McGaffigan traveled to Hannover, Germany where she served as the head coach of the Deutscher Hockey Club for one season. While in Germany, she took on many positions. She served as both the offensive and defensive coordinator, a goalie specific coach and also helped as a strength and conditioning trainer for the lacrosse team.

Reflecting on the women’s lacrosse team’s last season, Hughes believes that the team did not meet their full potential. This season, she believes that McGaffigan’s experience and fun sense of humor will help the team improve their skills as players and develop as a family.

“She is a good balance to my sometimes seriousness,” Head Coach Ashley Hughes said. “She has had coaching experience in Germany and brings a lot of experience.”

Team members are confident in McGaffigan’s skills  and are excited to see what she will contribute to the lacrosse program.

“I think she has a true knowledge of the game,” said Alex Grob, ’19, a defender and midfield player. “She’s really good at noticing people’s strengths.”

Grob added that the team is looking to improve on and off the field.

“My hope is that throughout the season we develop as a team and as a family,” Grob said.

McGaffigan is invested in the players lives off the the playing field and cares about improving their playing skills as well as being the best they can be off the field. It is more than just a career to her.

“We’re not so much coaching to win,” McGaffigan said. “I’d love to win a conference, but we want to make sure the players are the best versions of themselves. It’s a privilege for us to be here with them.”

The women’s lacrosse team kicks off its season on Wednesday, March 2 in a home game against Augustana College at 5 p.m.