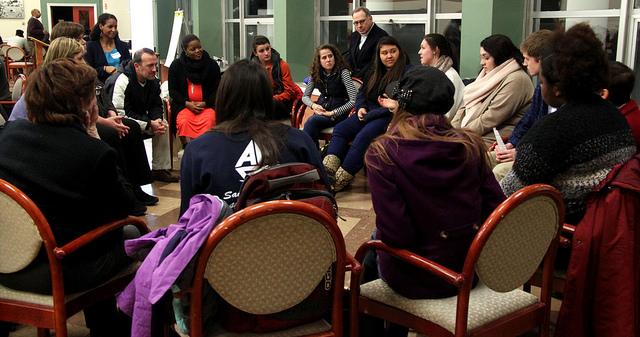 Attendees circled in groups in the Schultz Banquet Hall for discussions focused on topics such as inclusion, retention and the college’s statement of community as part of the Sustained Dialogues event on Thursday, Feb. 11, 2016.

Rhonda Fitzgerald, managing director of the Sustained Dialogue Campus Network, an international organization fostering clear communication between private parties, returned to Allegheny College for a community conversation on Thursday, Feb. 11, from 6 to 8 p.m. After  the first community forum, held after allegations came out against former Professor of English Kirk Nesset, multiple community conversations have been held on campus.

The community forums held after Nesset’s arrest never reached the same level of attendance as the first. After students at multiple forums discussed concerns with the lack of attendance, administration such as Associate Provost for Diversity & Organizational Development Ande Diaz specifically requested attendance from certain groups on campus. These included, but were not limited to, Greek organizations and sports team members. Greek organizations were each asked to send four representatives to Thursday’s forum.

Phi Delta Theta President Robinson Whitaker, ’17, was unable to attend the conversation himself. He did, however, ensure four representatives from his fraternity attended.

“I think it’s a good step. I think Greek life and the college have historically been divided,” Whitaker said.

He also believes the administration reaching out to different organizations is an effective method of reaching students.

“When you’re looking to enact social change on campus, you can’t look at the student body as a whole,” he said.

Whitaker believes many students identify more with the organizations they are involved in than as a single student body.

Brian Saltsman, interim director of the Center for Intercultural Awareness and Student Success, said that, while the members of CIASS did not have a hand in organizing the event, CIASS is supportive of it. He said that reaching out to organizations is a positive step.

“They want all the future community stakeholders there,” Saltsman said.

Whitaker said the fraternity intends on discussing the community conversation as a whole in their next chapter meeting.

“There’s a portion of chapter where we ask ‘what did you learn,’ or ‘what can you bring back to the chapter,’” Whitaker said.

Whitaker believes Fitzgerald’s presence was beneficial, as she is in charge of facilitating difficult conversations nationally and internationally. Her presence is a step toward a good conversation.

Although Saltsman said the college has its own specific issues and community that it must tend to, he believes Fitzgerald will still be helpful.

“Rhonda [Fitzgerald] and the Sustained Dialogues Institute has been more than instrumental…in teaching us to facilitate these discussions,” he said.

Saltsman said the college is only getting the tools it needs to succeed and the community is in charge of utilizing them.

Margo Birol, ’18, attended the dialogue, and agreed with Saltsman.

“I think the conversation started, but it needs to continue,” Birol said.

President James Mullen, spoke at the end of the event, apologizing for the stress expressed by some upperclassmen from having to educate their peers. He promised to do everything in his power to minimize this in the future.

“You have a right to be exhausted and for that I’m very sorry,” Mullen said. “Each of you means so much to me.”