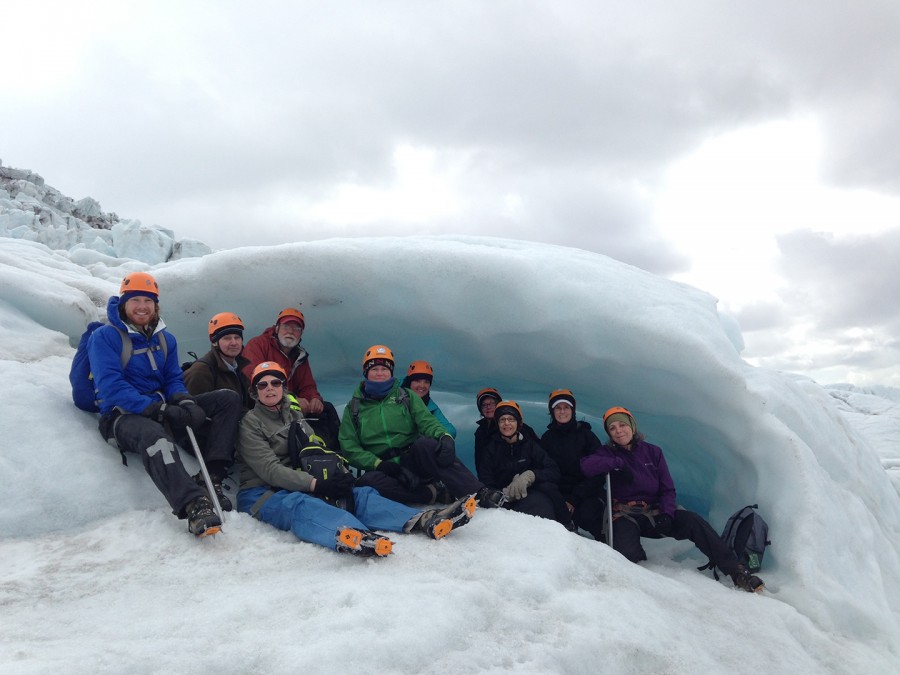 PHOTO CONTRIBUTED BY TIFFANY CIPOLLONE Allegheny faculty, staff and administrators pose for a group photo on the Falljokull glacier during the Iceland study tour in May 2015.

The first three tours travelled to Morocco and Egypt in winter 2011 and Israel in 2013. They were funded through a $400,000 Mellon Middle East and North Africa Grant. The tours to Egypt and Israel were the first to include faculty, staff and administrators. The Mellon Internationalization Grant has funded three more study tours since 2012: Japan and Iceland in 2015, and the final tour to Cuba in January 2016. The Mellon Internationalization Grant was for $675,000 and has been used to fund the hiring of an Arabic professor as well as the final three study tours.

The January tour was named “Legacies and Landscapes of Cuba,” and according to the tour leader Barbara Riess, associate professor and chair of the modern and classical language department, the main goal of the tour was to examine the changes that have taken place in Cuba since the country restored relations with the U.S. in December 2014.

“The Cuban revolution has always been this sort of romantic notion for many kind of left-leaning U.S. folks and a source of curiosity for a lot of people. It is one of four countries on the planet that we cannot go to legally, so it seems very attractive for people,” said Riess.

The main focus of the trip according to Riess, was to see Cuba before it changed. As well as this, each of the 10 participants had an individual theme that they examined while there. These themes included women in Cuba, economic and state post-communist transitions, ethics of the changes, the presence of technology and differences in race relations.

“The takeaway I think for many of the people was to be a little bit more systematic and aware of the processes that are behind…our everyday living because we got to see them in a completely different way in another place,” said Riess. “It was really powerful for a lot of people.”

The tour left on Jan. 3, 2016 and the group spent 10 days in various regional provinces of Cuba. According to Riess the current situation in Cuba requires that Americans go through an organized tour in order to enter the country. Although Riess emphasized that the focus of the tour was intellectual she said there were still some tourist aspects to the trip like when they visited exhibitions of coffee and tobacco growing.

“We were very much put into these spaces of tourism that looked at a stereotypical look at Cuban life. But we also had lectures and that allowed us to go a little bit more deeply into the questions that we were looking at,” said Riess.

In order to assist the group in their experience, Riess solicited the help of Joseph L. Scarpaci, professor emeritus of geography at Virginia Polytechnic Institute to develop the interrogative aspect of the tour.

A requirement of the tours is that the participants take what they learned from the experience and share this with the Allegheny community. Already members of the group have begun sharing their experiences with their community.

“We’re still going through what we learned and how best to organize that going forward,” said Riess.

The tour was funded through Allegheny College’s Mellon Internationalization Grant which the college received in 2012. According to Laura Reeck, associate professor of modern and classical languages and co-principal investigator of the grant, the intention of the grant was to bring global learning and international perspectives to campus and the study tours are part of the college’s greater internationalization plans.

“Anyone participating on a study tour has not been to the destination in question,” said Reeck. “There are an identified set of themes that unite the participants in…an intellectual exploration. There’s an experiential component which I think includes an element of surprise which is so much about being in a place that you’re not familiar with. With the Allegheny model, faculty development has now been joined with staff development on these study tours.”

The study tours were intended to assist the college in its internationalization efforts.

Although the college does not yet have a comprehensive internationalization plan, Reeck claims that some important and necessary work has already been done. This includes new curriculum in the form of Middle East and North Africa studies and global health studies, as well as new positions in the international office and international recruitment in admissions.

The study tours came as a way to reconfigure how the college views faculty development, particularly in relation to these internationalization efforts. According to Reeck, it was suggested by Eric Pallant, professor and department chair of environmental science/studies, that faculty development should involve sending faculty overseas. The idea was that faculty should go on something equivalent to an experiential learning seminar.

“When you add up the number of people over time who have been on study tours…between a couple of different grants, we’re looking at about 60 people from across the faculty and staff…and that I think is actually a significant contribution,” said Reeck. “I see it as…making receptive all of these people to internationalization efforts on campus. I think they’ll have a new view of those efforts.”

Rachel O’Brien, associate professor and department chair of geology, led the 2015 study tour to Iceland along with Tiffany Cipollone, regional advancement officer. O’Brien said there were a couple of main overarching themes for the study tour including interpreting the natural landscape and understanding the geological processes that formed it, looking at the way in which Iceland generates its energy—both hydroelectric and geothermal—and finally understanding what the Icelandic culture is like.

The group climbed glaciers and lava fields, saw Icelandic films and theater, went to public swimming pools, visited parliament and spontaneously participated in a political rally while they were there.

“We did a lot of different things aimed at trying to understand Icelandic culture,” O’Brien said.

In doing that, the group attempted to avoid doing things that were classified as “touristy”. They focused on not just doing things that a regular tourist that went to Iceland would do, but really immersing themselves in the culture.

“There was incredible bonding that went on during the trip,” O’Brien said. “That’s another kind of key component here. It’s important to get as many employees on campus to encourage our students to have the experience of studying abroad…but also…this is a really great way to get to know your colleagues. We all tend to be busy at Allegheny and we tend to stay in our own offices, so I thought it was really a treat to spend some extended time and get to know them a lot better.”

The inclusion of all staff, faculty and administrators in the study tours has worked to developed relations between different departments and areas of the college and is also an integral part of the college’s internationalization process.

“One thing about internationalization is that it doesn’t happen in one unit, department, area, with one specific population on a college campus,” said Reeck. “It’s multi-pronged. It has to happen everywhere with everyone and everyone essentially has to be a stakeholder in that. I think typically staff, who are not already working in the international area are overlooked.

“I think we’ve also expanded the idea of what it is to ready people on campus for all of the other aspects of internationalization. I think that with faculty and staff going on these study tours…in some cases it has impacted their work directly, and in other cases…it has impacted how they see things. But both of those are very useful if the campus is in the process of internationalization.”

Sharing the experience: how the tours assist with international development

Jason Ramsey, ’98, associate director of information technology services,  was one of three staff members who participated in the January 2016 staff study tour to Cuba as part of Allegheny College’s internationalization efforts.

The week after Ramsey returned he gave a 40-minute talk to his son’s second grade class at First District Elementary School as an effort to help educate the city of Meadville which he considers part of the broader campus community.

He said he received a broad range of questions from the class including inquiries about what it is like to be a kid in Cuba,  if there were cheerleaders in Cuba and why Cuba and the U.S. are not better friends?

Ramsey said he went into the classroom armed with photos and trinkets like Cuban money, baseball gear and a toy.

“I didn’t know whether I would bore them or not and it turned out…they all wanted to ask questions. They were far more eager than what I…expected,” said Ramsey. “I think it’s neat having kids in Meadville who may have very little connection with the college otherwise, getting to hear about the dad of their friend going to Cuba. It kind of plants that seed of internationalization where that’s a normal thing for them. I think that’s important in any kind of community.”

Other participants from the trip have also begun sharing their experiences. Kalé Haywood has given a presentation at the Unitarian Church of Meadville and Barbara Riess is hoping to work the trip into her FS 101 and her junior seminar classes for the fall semester. The group also plans to present at Gator Day and at Reunion Weekend.