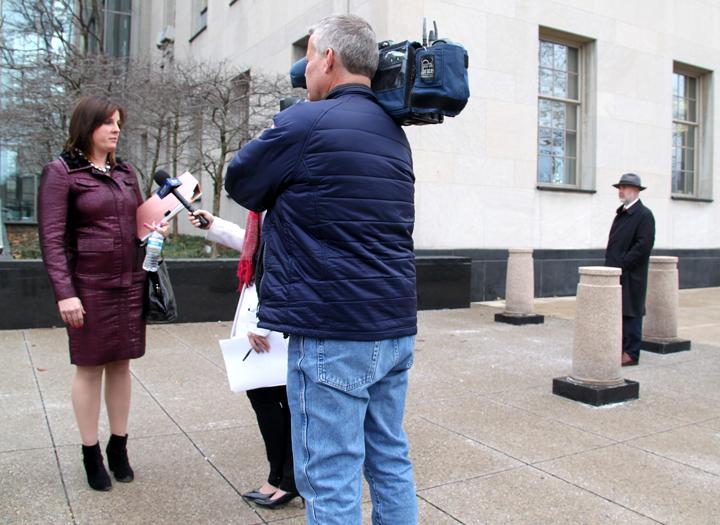 Kirk Nesset's attorney, Meagan Temple, speaks with the news outside of the Federal District Court building following the sentencing of the former Allegheny College professor on Feb. 8, 2016

Former Allegheny Professor of English Kirk Nesset, 58, was sentenced to six years and four months in federal prison on Monday, Feb. 8, 2016 in the United States District Court in Erie.

Nesset was arrested on Oct. 1, 2014 after federal and state officers searched his Meadville home, where they found more than 500,000 videos and images of child pornography on a shared file. Nesset resigned from the college on Oct. 2, 2014, with the college accepting his resignation. President James Mullen said they had heard nothing about the charges against Nesset until he told them himself.

On Oct. 14, 2014, Nesset was given a three-count indictment for receiving, distributing and possessing child pornography in the form of videos and pictures from 2005 to 2014. He originally had a public defender for representation and switched to Attorney Meagan Temple of Bruzzese & Temple, LLC, of Pittsburgh.

Despite admitting to the three counts at the time of his arrest by federal law enforcement agents, Nesset originally pled not guilty on Oct. 15. He reconsidered this plea and switched to guilty on April 6, 2015.

U.S. District Judge David S. Cercone heard Nesset’s guilty plea and set the sentencing date for Aug. 10, 2015. The sentencing date was moved back to Feb. 8 in the hopes that former colleagues would serve as character witnesses for Nesset.  Cercone agreed to let Nesset report to federal prison outside of Youngstown, Ohio city limits before his sentencing hearing. Temple said the time since May that Nesset has spent in the prison will likely count toward his sentence.

While no professors spoke on Nesset’s behalf, Cercone stated that he received many letters of support attesting to Nesset’s character. Temple also asked the 14 to 15 members present in the courtroom from the college and local community to stand to demonstrate their support for him.

Nesset entered the courtroom in his shackles, wearing an orange inmate jumpsuit and orange plastic clogs. The shackles on his hands were removed for the proceedings, but those on his feet remained. Once seated, Nesset nodded to the familiar faces seated behind him. He was flanked by two marshals on his left and right.

Nesset spoke on his own behalf first.

“It’s been just about 16 months since my arrest and I am still very full of shame and sick with regret,” he said. “I take full accountability for what I’ve done.”

Nesset reported speaking to a counselor in the time leading up to his arrest, citing depression and isolation as reasons for his behavior, but he did not speak about his addiction to child pornography to avoid the arrest he eventually faced. Temple cited his counselor’s ignorance to the problem as a contributing factor to Nesset’s addiction.

“His psychiatrist was medicating him with [things] that made the [hoarding] worse,” Temple said. “Now that everybody knows, he can finally get down to the real root of the problem.”

Nesset acknowledged his fault in the matter.

“I found through my counseling that I am not only a bad person with bad judgement, but a person with an illness, a mental illness, and a disorder,” he said.

Temple disagreed that Nesset was a bad person.

“The truth is that Kirk is a good person. He just did something very wrong,” she said. “He is someone who is very, very troubled.”

Nesset hopes that through his work and writing, he will be able to raise awareness about people like himself and the damage his and others’ actions have on children.

“I will make good where I did bad,” Nesset said.

The judge said that Nesset was also diagnosed with bipolar disorder, which Temple cited as another mitigating factor.

Assistant U.S. Attorney Christian Trabold, however, said that Nesset’s collection of pornography is one of the most extensive he has ever seen.

Trabold dismissed the defense’s claim that Nesset’s collection of child pornography was simply a case of hoarding related to his disorder.

“Mr. Nesset also told the FBI that he masturbated to the material,” Trabold said.

Trabold also told the court that Nesset had admitted a preference for young girls between 10 and 13 years of age.

While Nesset may not have had time to view all of the videos and images, Trabold said he must have known what they all were, as he admitted upon arrest that he had sorted everything into labeled folders while discarding unwanted material.

Trabold argued Cercone had to take into account the effect Nesset’s crimes had on the victims.

“The victims are unmistakably shattered by the initial abuse,” Trabold said.

Cercone agreed that Nesset’s sentence must not only consider the impact that it will have on him, but on the victims and community as a whole.

“No, this isn’t about just about the victim’s past,” Cercone said. “This is about protecting society, punishing the defendant for what he’s done, but on the other hand this sentencing is based on the character [of the defendant]. Positive factors cannot just be swept under the rug.”

“As I say in all these cases, one day the government will bring before me the individuals who produce this garbage,” Cercone said. “I will wait for that day.”

In consideration that Nesset had no prior criminal record, and that there is no evidence he ever acted upon any urges he may have had when around children, Cercone sentenced Nesset to 76 months on both the first and second count to be served concurrently. Because Nesset has no means to pay a fine, there will be none. He will, however, be required to pay $78,000 in restitution.

Professor of English David Miller, who was in attendance, said he was impressed with the compassion and deliberation of the judge. He felt the prosecution’s suggested sentence was unreasonable.

The requirements of Nesset’s sentence include but are not limited to 10 years of supervision after his release. He will participate in mental health or sex offender treatment that has been approved by his probation officer. He will also be a registered sex offender and must disclose the specifics of his conviction to any future employers. He will have access to a computer and the internet, but must consent to any installed software that may monitor his activity. He will not be permitted to frequent or loiter at places with children.

“I believe that the defendant has years to contribute to society, as he described earlier,” Cercone said.

Nesset has 14 days to file an appeal. If it is not completed within that time, he will lose that right.

Cercone agreed to make the recommendation requested by Temple that Nesset be held at Federal Correction Institution Safford Arizona, closer to where his two sick parents reside.

Temple said that it is likely Nesset will never see his parents as a free man again, but will likely stay in Arizona after his release.

“As far as I know…he plans on moving back to Arizona,” she said.