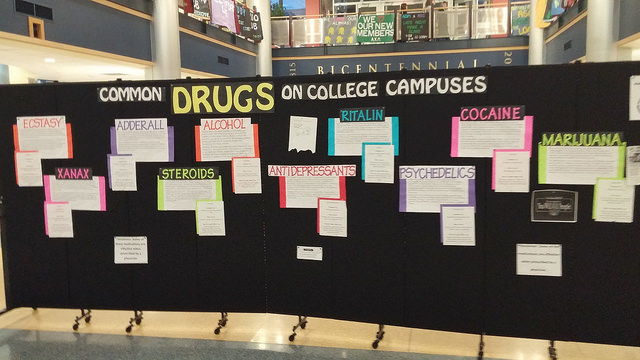 The Office of Student Involvement partnered with the Wellness Institute and created a controversial display about the dangers of recreational drug abuse. After student outcry on social media, the display was removed on Jan. 24, 2016, just two days after it was put up.

The Office of Student Involvement partnered with the Wellness Institute and created an informative display about commonly abused drugs on college campuses on Jan. 22, 2016. The display covered drugs including but not limited to cocaine, marijuana and antidepressants.

On Jan. 24, OSI removed the poster after pictures sparked outrage among students on social media, particularly the section on antidepressants. Some in the student body have felt the display contained misleading information that they found dangerous to the Allegheny community.

“Educating people on what prescription and illegal drugs do to the body, both good and bad, and how we see that in society—that’s really important,” said Liliana Carbon, ’18, in response to the display. “However if we’re an institution of academic integrity, then we have to make sure we have integrity with the information that we give to students.”

Reactions from the student body were voiced from the Allegheny chapter of Active Minds, a national organization that serves to reduce stigma and raise awareness for mental health issues.

Michaela Cowden, ’16, president of the Allegheny chapter of Active Minds, contacted administration regarding the common drugs poster and the information it was displaying.

“I felt like I had a responsibility as president of Active Minds and also just as a human being who has dealt with unfair societal treatment with regard to my own experience with mental illness,” Cowden said. “What kind of leader and person would I be if I didn’t take a stand against something that only further stigmatizes mental illness given my position within Active Minds and my own life experiences?”

After the display was taken down, Gretchen Beck, director of student involvement and at the time interim associate dean of students, had reached out to Cowden to have a meeting to discuss the next steps as to how to fix the issue. Beck and Cowden said the conversation was about getting more factual information and raising awareness about the resources for mental health issues.

“I shared my own personal concerns as well as those from our community that were articulated to me and we are actively working together to find a resolution in all of this,” Cowden said. “I was happy about being contacted by [Beck] because that was an indication that our concerns were being heard.”

Beck said ensuring students’ voices were heard and that their concerns were addressed was a priority.

“We want to work with Active Minds to reach out to the student body to provide information that is important and relevant to them,” Beck said.

Active Minds will return to the Dean of Students Office later with a list of questions and concerns, including how to create a more informative display.

“I would like to see this situation unite us as a student body in support of our community members who have experienced mental health issues,” Cowden said.  “It’s been a challenge to gain a large support base because the topic of mental health is so stigmatized. However, I hope this has shown people that they have the power to voice their support and it will only help make our campus a better place.”

According to the National Institute for Mental Health, in 2014, nearly 20 percent of United States adults suffer from a prevalent mental illness. According to the Allegheny College Counseling Center, 266 students had spoken with a counselor in the fall 2015 semester. Nearly a quarter of the Allegheny student body will receive help from the Counseling Center in their college career.