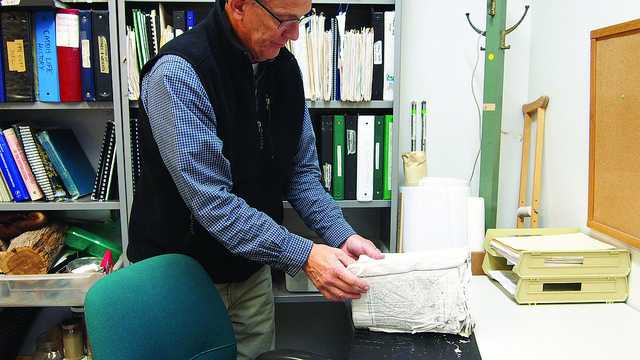 Scott Wissinger, professor of biology, looks over items that were damaged by the flooding in Steffee on Nov. 22, 2015. According to Eric Young, Meadville chief of police, the department is still conducting and investigation into the incident. The college is still calculating costs, but the repairs that were done over break have added up to more than $160,000.

Steffee Hall of Life Sciences was subject to flooding on Nov. 22, 2015 after an unknown assailant(s) reportedly turned on an emergency safety shower on the second floor and left it running. Damage to the east wing of the building ranged from the second floor down to the basement, affecting the building’s structure along with an electrical panel, scientific equipment and personal property.

Eric Young, Meadville chief of police, confirmed the department is conducting an investigation into the incident.

“We’re still in the works,” said Young. “It’s a pending investigation working jointly with the college administration, Safety and Security.”

“It is still ongoing, but based on the work done over break to get things ready for classes…I can tell you that, that part of the repairs is over $160,000 so far,” said Wetsell.

Insurance adjusters have visited Steffee on multiple occasions since the incident to assess the damage, with their most recent visit on Wednesday, Jan. 27 to review scientific equipment.

“We’re compiling a list from all the faculty that were involved and every item on that list we have to talk about what’s the replacement value? Is it covered or not covered? That type of stuff. Every office that got touched by water we walk through that. There’s a lot of rooms and a lot of details,” said Wetsell. “So we’re working through that inventory with the insurance company and then we’ll work through the replacement and or repair of all those. We’re still compiling that list.”

Wetsell hopes the inventory lists will be finalized within the next 30 days.

So far the college has paid a $25,000 deductible, but could potentially pay more if insurance does not cover certain items or repairs. As of now, insurance has covered all costs.

The future ramifications of this incident can affect the college’s renewal premium, but Wetsell could not definitively say whether or not this would ultimately raise premiums.

“I’m glad the building is back online, but I’m still disappointed it ever happened,” said Cole.