Swimming and diving teams train in Florida for two weeks over 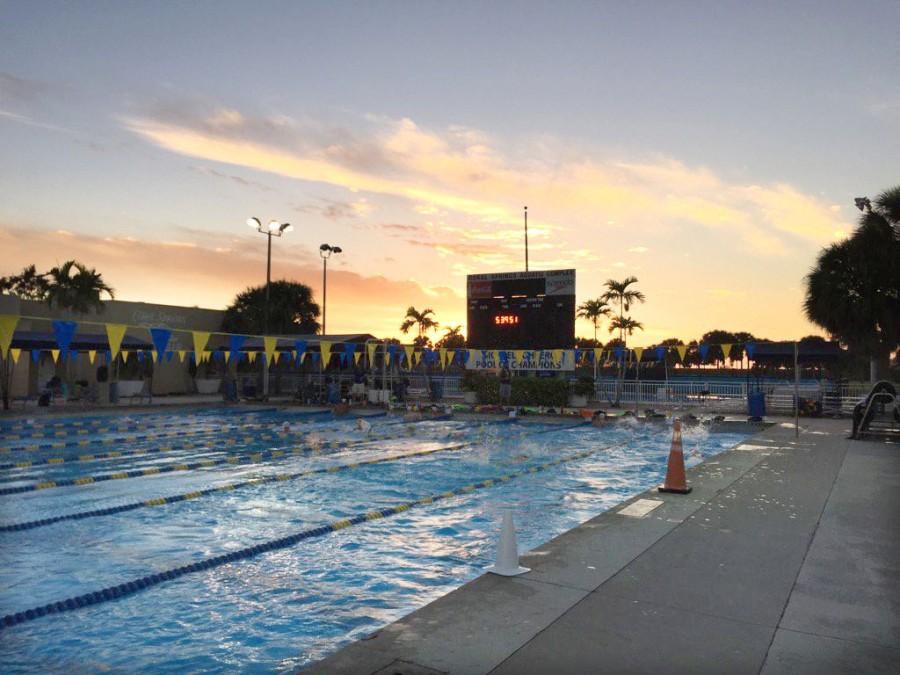 The swimming and diving team took their annual training trip to Coral Springs, Florida over winter break. The team held two-a-day practices and had an informal meet against Wittenberg College.

The Allegheny swimming and diving teams went to Coral Springs, Florida over winter break for a training trip and team bonding.

“Being in the nice weather and on the beach was nice, and not having to worry about school work on top of training,” said Erica Salizzoni, ’16.

Salizzoni was named NCAC Athlete of the Week on Jan. 18, 2016 following a 479.00 point Allegheny record-breaking performance at Case Western Reserve University. The 25-year-old school record for the three-meter dive was previously held by Melissa Moody, ’91.

“I was surprised when I found out, but I was excited to be recognized,” Salizzoni said. “It wasn’t expected, I was just trying to get my second regional score but it was definitely a confidence boost as we go into Conferences and Regionals.”

While in Florida, Salizzoni and the rest of the team spent hours a day training for the latter half of the season.

“The trip is our most intense training all year so the time we have to relax and go grab ice cream or hang out on the beach is a highlight,” said Henry Ditzel, ’17.

Elizabeth Schafer, ’17, said she loved the team bonding aspect of the trip.

“The trip seemed longer this year, but I had more fun,” Schafer said. “Being a junior, I knew what to expect from the trip and I did what coach said and had fun with it.”

This year the trip brought two weeks of intense training for the team followed by an additional week on campus before classes started.

“We have a new assistant coach this year and he has been good with providing more energy and knows what we’re going through,” Ditzel said.

Training in Florida brings more time in the pool each day and harder practices for the team compared to regular season practices on campus.

“During the training trip, we have two-a-days almost every day which is the biggest difference in our practice schedule,” Salizzoni said. “The pool is also used by Division I athletes at the same time, so one day there were about 50 divers. There’s more skill level present and we [divers] are separate from the swimmers who have their own pool.”

Practicing around DIII athletes allows the team to improve their own skills and see how others practice.

“For morning practices, we are in the same size pool as we have here for two hours and we do test sets to record our heart rate and times every day, which normally is only once a week here,” Ditzel said. “In the afternoons we swim long course in a meter pool, and many of us are not used to it.”

Ditzel said morning practices during the season are typically 50 minutes of lifting and 45 minutes in the pool, but during the trip, those practices are two hours in the pool and an hour of running or lifting.

“We spent two days in a hotel close by the pool then we went to the villas, which are apartments we stay in with four or five roommates. At night, we do class dinners and have some down time,” Ditzel said.

During the trip, the teams participated in a meet against Wittenberg University.

“We don’t keep score from the meet, some of us swam well but we were tired,” Ditzel said. “Each year there is a relay called the Pineapple Relay with a senior team and a freshman team that is mixed with swimmers from Allegheny and Wittenberg, and the winner gets a pineapple. It’s a lot of fun, we warm up in lanes with Wittenberg and we face them in conferences and know the struggles of each other.”

As the season continues, the team is looking forward to conferences and improving further on the progress that has been made this season.

“Conferences are always exciting, our hard work through the season will show and it’s a fun three days with the team,” Schafer said.

Salizzoni said the women’s team has lost a few women from the team but are looking forward to seeing who will step up.

Ditzel said competing next to Denison and Kenyon who are national title competitors creates a nice atmosphere and is entertaining to watch.

“We have had one relay since my freshman year with the same guys, this year a freshman replaced one of the spots. We have been close to the team record the past two years and I think this year we have a shot at taking down the record and getting new names up on the board,” Ditzel said.

The teams will face Penn State-Behrend and Saint Vincent College at home at 1 p.m. on Saturday, Jan. 30.