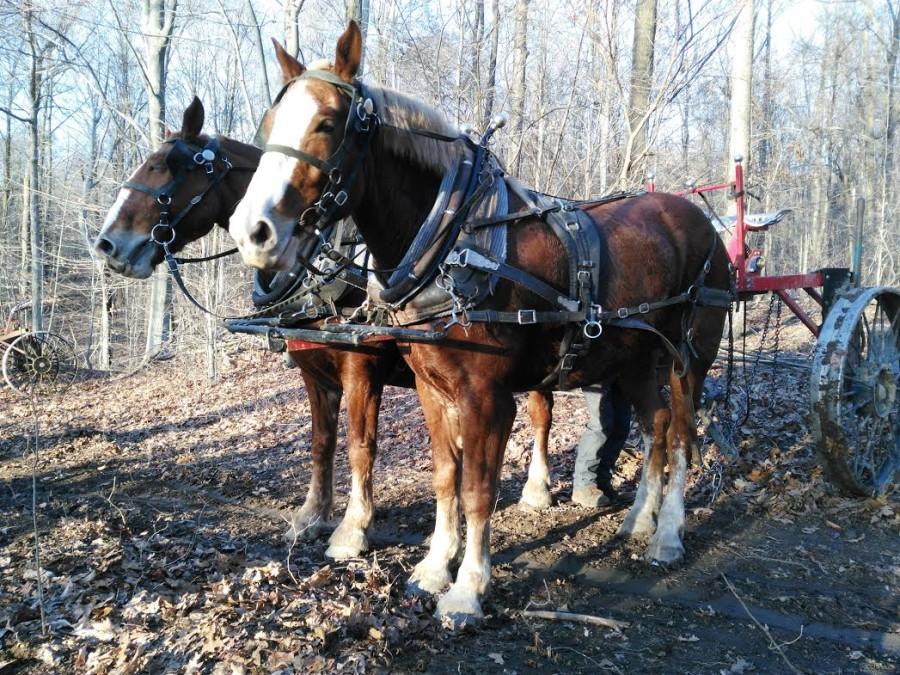 Draft horses drag the trees to landing sites near Baldwin Street Extension. From there, they are taken by semi-trailer truck.

Allegheny College’s 100 acres of forest, located in The Andrew Wells Robertson Athletic and Recreation Complex, is undergoing a major logging expedition, which is slated to be complete in January of 2016.

According to Rich Bowden, professor of environmental science, planning for the logging expedition began about two years ago when an Allegheny alum and forester, Guy Dunkle, approached the college asking if it would be interested in pursuing logging and revitalization of the forest. Dunkle works for Firth Maple Products which is a provider of sustainable forest management, northern hardwood lumber, veneer logs and maple syrup in northwest Pennsylvania, according to the company’s website.

“The initial work was done to trim many of the grapevines. An overabundance of grapevines are good, they provide a good food source for wildlife and good habitat, but if there are too many of them, they climb up with the trees. They can weigh a half to a full ton and that is a lot of weight that a tree has to bare, so that causes damage to the limbs. The grape leaves are large, they shade the trees, they reduce the growth of the trees,” Bowden said.

The reason the grapevines must be taken out is because of the previous forestry operation at Robertson, which took place approximately 20 years ago. This previous operation took more trees than needed, which ended up providing more light for the grapevines to grow, Bowden explained.

Bowden explained that grapevines can live in forests without harm but because of the previous operation, a number of grapevines had to be taken out.

“Grapes themselves are not bad… But because they grow in the light and the last time there was a forest operation there were so many trees taken out—adding more light—there was no control, so [the grapevines] really took off,” Bowden said.

After removing the grapevines, Firth Maple Products began marking trees in the forest which would be logged using Amish logging teams. Firth utilized a the technique of “worst first forestry.”

“[Worst first forestry] is a specific technique where you take out the worst trees first. That is contrary to most harvest operations in this state where people take the best and leave the rest.  It is called high grading forestry,” Bowden said.

Harvesting began in the week of Nov. 15. The Amish logging teams are specially trained to ensure the trees they are harvesting fall in the right direction to provide minimal damage to trees in the vicinity.

Once the trees are harvested, draft horses drag the trees to landing sites near Baldwin Street Extension. From there, they are taken by semi-trailer truck.

Not only will Allegheny benefit economically from this operation, but it will also provide educational benefits. It will also help beautify the forest.

“The current operation is an outstanding example of sustainable forestry, combining considerations of ecological integrity, aesthetics, and future economic value.  This will be an excellent teaching tool for our students, and also for the local community,” Eric Pallant, chair of the department of environmental science, said.

The Robertson complex is an important resource for the college.

“We view the Robertson property more like a National Forest—where multiple uses can coexist. The benefits of multiple-use management include outdoor recreation, athletic fields, off-campus physical plant storage, off-campus processes and education,” said Scott Wissinger, professor of biology and environmental science. “The latter can include demonstrations of sustainable forestry.”

Chase Davis, ’18, is currently enrolled in Environmental Research Methods and believes that having this forest right on campus is a strong addition to his classroom experience.

“[Robertson] is such a great addition to what we are doing in the classroom. It is hard to perform experiments, especially in the field of environmental science, sitting in a classroom. So, having that addition has definitely enhanced my learning far beyond what it could have been if we did not have it,” Davis said.

Davis also believes being able to apply what is learned in the classroom through lecture and textbooks in the field advances his knowledge and enables him to gain a deeper understanding of the material.

“I am definitely a visual learner. The classroom experience did not use a lot of a textbook. We got a lot of lecture from our professor and from those lectures you could see it in the field,” Davis said.

Although, no forester can predict exactly what will occur with a forest over a long period of time, Bowden believes this operation will allow the forest to become rejuvenated and provide for healthier conditions for growth.

The short-term benefits of the logging are believed to help prepare the forest for the inevitable invasion of insects or other diseases, which have invaded other forests in northwest Pennsylvania, according to Bowden.

The long-term benefits of the logging include having a more beautiful, sustainable forest which provides an area that continues to act as a recreational area and acts as a strong tool for professors to use to enhance their courses.

Even though the main focus of the operation was to revitalize the Robertson forest and ensure it would continue to provide a space for students, staff, faculty and the community, Allegheny is estimated to make a profit of $15,000 through the logging of the forest. Another long-term benefit will be the potential for more economic profit for the college through logging.

Bowden said it is not exactly known when Allegheny will have to go through another forestry operation but estimates that it could be anywhere from 10 to 20 years.