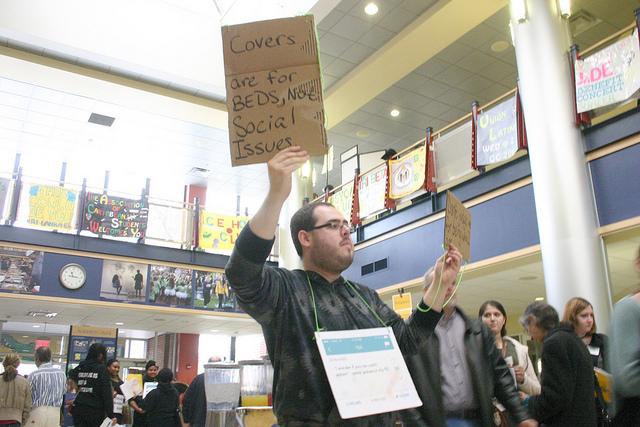 Alec Bovee, a student at Penn State Behrend, participates in a student-led protest in the campus center lobby on Nov. 21, 2015.

Nearly 20 Allegheny student protesters took up positions in the campus center lobby on Saturday, Nov. 21 to protest what they defined as the college’s failure to secure a safe environment for all students. The protest was held during an Admissions weekend event.

As families of prospective students arrived for an Admissions weekend, the student protesters circulated throughout the first and second floor of the campus center carrying signs warning that Allegheny was not a safe place for minority students. According to the Office of Admissions, the event was attended by 71 prospective students.

Protesters handed out a list of demands as well as a document outlining the problems they perceived on campus with facts and figures.

The list of demands was comprised of six items:

Ande Diaz, associate provost for diversity and organizational development, declined to comment on the protesters call for a vote of no confidence against her, however, she recognized the concerns voiced by the protesters.

Diaz said that she believes progress has been made at Allegheny and that the college is committed to continuing its efforts to make an inclusive environment for all students. She said that often the work that is done is not visible to students.

Several protesters also wore signs with enlarged screenshots of social media posts which targeted specific groups on campus. Most were from the anonymous app Yik Yak. The protesters said the posts were evidence of the intolerant climate on campus.

According to statistics provided by the protesters from a 2010 college report, only 65 percent of “students of color” felt comfortable with the climate on campus, as opposed to 83 percent of white students.

“There’s just been a lot of tension on campus,” said Izoduwa Idehen-Amadasun, ’18. “We saw a lot of hate on Yik Yak last year.”

Idehen-Amadasun said part of the reason for the protest was to inspire some kind of action. She said the conversations have been going on for a long time on inclusivity, however substantive changes have not been made.

Brianna Cusanno, ’17, said the other issue frustrating many students is the high rate of turnover in positions devoted to attaining greater equality and diversity on campus. She cited the departure of two directors of The Center for Intercultural Advancement and Student Success, after less than three semesters at the college, including Armenta Hinton and valerie guerrero, as examples.

“I can tell you it’s because they are exhausted by the climate on this campus,” Cusanno said.

Cusanno said with the loss of such positions on campus, many students feel the situation is not improving because there is no one to move the issue forward.

“We just feel no substantive changes are being made and meanwhile our mentors are leaving,” Cusanno said.

Allegheny Student Government Director of Diversity and Inclusion Connor Racine, ’16, explained the decision to protest at an admissions event was not an accident.

“We need to make sure that we are bringing in students who are dedicated to social change,” Racine said.

Ron Cole, provost and dean of the college, was at the admissions event and spoke with some of the protesters regarding their concerns.

“We talked about some of the change that has to happen on campus, which I support,” Cole said. “That change has been slow and I recognize that it has been slow.”

Cole said he was pleased the protesters allowed the admissions team to do their job and said the reactions he heard about the protest were largely positive. In a written statement, Cole also voiced his support of the work Diaz has done on campus.

Cornell LeSane, dean of admissions, reported similar reactions from the visitors he spoke with. He said the event helped showcase the level of student activism on campus.

“We have students who care about national issues,” LeSane said.