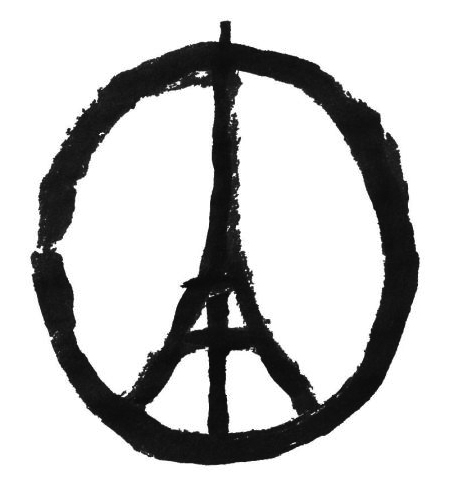 Will Schmitt, the French teaching assistant, was coming home from Pelletier Library. Ben Ziolkowski, ’17, was in a hotel room preparing for his last away football game of the season. Amasa Smith, ’17, was in her dormitory in Paris, France when she heard the news.

The terrorist attacks on Paris, France on Friday, Nov. 13 affected all of them.

Schmitt is currently fulfilling his dream of living in America. He is at Allegheny for one year, working and studying as the French teaching assistant. Paris is his hometown.

Ziolkowski is preparing to achieve his life goal of studying abroad in Paris in the spring. He is determined not to let the attacks prevent him from going.

Smith cut her semester abroad in Paris short by one month. She returned to the United States five days after the attacks.

All three of them represent the international reach of the attacks, that goes far beyond the 129 people who were killed.

As Schmitt returned home from the library after studying for his history class on Friday, Nov. 13 a notification from USA Today talking about Paris popped up on his iPod. Odd, he thought. Usually people only talk about Paris when there are big events; the Olympic games or whatever. He opened the news application to see that a bomb had exploded in Paris and 24 people had been killed. Immediately he turned on the TV.

“I saw the news: 24 people in Paris. After that I tried to read as much information as I could. I saw 42, then 60 then 126. The number was just increasing. And I saw 300 wounded persons more or less,” Schmitt said. “I finally realized on the TV, that terrorist attacks have been carried out by [the Islamic State group] in six different sites in Paris.

“First I was shocked, speechless. I was really sad for my country at first. Usually nothing happens in France. We don’t have this right to bear arms. It’s not in the constitution.”

The entire side of his mother’s family lives in Paris and it was not until the following morning that Schmitt received a response from his father assuring him that everyone was safe.

“All my uncles, aunts and cousins they live in Paris. I was quite worried because they love soccer, and during that night…there was a game between Germany and France; it was a huge event…maybe they were just around the stadium, having a beer…having fun with their friends. Anything can happen in these kind of circumstances,” Schmitt said. “I just felt a huge relief for my family, but at the same time was so sad for my country.”

The pain Schmitt feels for his country is echoed in the scenes shown through the media coverage following the attacks.

“I saw on the news that everybody was crying on the streets. Even if you didn’t lose someone, like your sister or brother, you feel sad for your country,” said Schmitt. “I saw this video of a kid, who was talking about flowers. He was just a tiny kid, maybe five or four and he said that these people from this group they got rifles and weapons to shoot at people, and French people got flowers. As French people we have flowers to be nice to people and these guys they got weapons and firearms to destroy it,”

Despite the tragedy of the event, Schmitt said he feels an unprecedented sense of unity within France at the moment.

“In France, we don’t really like saying that we are ‘French.’ I mean this kind of nationalism that you can have in the United States, or patriotism…we don’t really have this in France. But when this kind of attack happens, it’s like everybody feels like you’re French, and they have a real identity,” Schmitt said. “Everybody was united. For the first time, I see the French really united. In spite of the economy crisis…in spite of the corruption…everybody can feel this union and everybody is united. When you have this kind of event, you need to be really close. That’s my feeling.”

This unity helps Schmitt to remain in the United States as he continues to live his dream. He said that if any of his family or friends were injured or killed he would have tried to return to France, but he does not believe that people should let this event deter them from doing what they want.

“I’m living in a country where there’s probably a shooting every two weeks. In the United States…you can be shot by someone just like this on the spot. What I’m saying is no matter where you live, no matter where you are, you just need to do whatever you want to do,” Schmitt said.

Ziolkowski echoed this sentiment, saying that the news was shocking but he refuses to let the attacks prevent him from studying abroad in the spring semester, something he has wanted to do since his freshman year.

“People started asking me if I was still going to go, I said yes,” Ziolkowski said. “I’ve been looking forward to this program since I came to Allegheny. You can’t let something like this deter your plans. You can’t let being scared defer you from your life goals.

“Obviously my parents are a bit concerned but I think they’re just happy for me to fulfill what I’ve been looking to do. They know this is something I’ve wanted and they’re happy to see it’s finally coming around,” he said. “I’m confident France is going to increase their security and we’ll be safe over there.”

Ziolkowski will be traveling to Paris with the same program which Smith, a photo editor for The Campus, recently returned from. The program is one semester and run through Boston University. The first eight weeks are classes and the students spend the last seven weeks working at internships throughout Paris. Smith was halfway through her internship when the attacks happened.

She was with her roommate and Allegheny student Anna White, ’17, in their dorm-room when they first received a text asking if they were OK. When they initially heard the news, it was just the first shooting at the restaurant. She said they stood in their hallway with their resident adviser, a graduate student from Boston University, talking and trying to gather as much news as possible. Their first step was to make sure that everyone on the program was OK.

“Honestly, that night we just stayed together and kept up with what was going on,” Smith said. “Any kind of event like this, no one…knew what’s going on and how serious what was happening was.”

On her choice to leave, Smith said it was not a black-and-white decision. The attacks on Friday, the ongoing threats to Paris and the fact she had already completed 12 credits that would transfer back to Allegheny all factored into her decision to return home. On Sunday, Nov. 15, Smith and White both made up their minds to leave Paris.

“A lot of factors when into it,” Smith said. “For me personally, it came down to the fact that if you live in a city, the best thing you can do is try to go back to normal life. But it’s kind of different when you’re someone who’s studying there and that isn’t your home.”

Smith was completing the internship portion of her program and said this also influenced her choice.

Phillip Wolfe, professor of modern and classical languages, does not believe that the attacks will have any long term repercussions for study abroad.

“The fact is that Paris is going to be topsy-turvy for a couple of weeks I’m sure at least. On the other hand Paris is very often topsy-turvy,” Wolfe said. “This sort of thing has been happening, not on as large a scale perhaps, but in France for a long time.

“Violence in a big city, or violence everywhere, it’s unfortunately a part of life. It’s going to happen, no matter where you are. What’s been happening on American campuses is not exactly reassuring either.”

Shanna Kirschner, assistant professor of political science, reiterated Wolfe’s sentiment as she stated that she believes there is not quite as much reason to panic as some people believe. Kirschner specializes in Middle East politics, ethnic conflict, civil war and international institutions.

“I think it’s not a new thing, to have terrorist groups in the world. Many of them have had reach beyond their region. Although it seems frightening and we should be concerned, this is a comparatively small group that has carried out one set of attacks against one country outside the region and I think the prospects for a world war are still pretty much, no,” Kirschner said. “We have an ongoing international terrorist problem, but that’s a different story.”

“There’s an argument to be made that they’re shifting to a strategy where they try to wear down western powers–what we call an attrition strategy in terrorism…trying to slowly over time raise casualties to eventually get western states to pull out of the campaign of airstrikes in Syria in particular, so they have a better chance of their central goal, which is taking territory in the region,” said Kirschner.

Paris was also a moderately easy and effective target for the terrorist group.

“It’s a relatively soft target, that makes it comparatively more easy, striking civilian targets, non-combatants is relatively easy from a military standpoint,” Kirschner said. “Of course Paris is a place that has a large place in our imagination, sort of symbolically. It is a good target from their perspective because it’s going to have a big impact on people’s perceptions and fears. If you look at the different reaction to the attacks that were carried out the day before in Beirut, which also killed tons and tons of civilians…there’s virtually no media attention to that as compared to Paris. I think that demonstrates why Paris is an effective target from the perspective of the terrorists.”

In response to the attacks, France increased bombing sorties in Syria and have closed its borders. According to CNN, a plan by French president François Hollande to extend the state of emergency declared the night of the attacks until February 2016, is set to go to France’s Senate for vote on Friday.

Schmitt said he is extremely proud of the way his country has reacted.

“If these guys want to wage a war against France, we got to reply. We got to do something about it. I’m not saying that we have to bomb every population…but if these guys are killing French people, are killing innocent people…we got to do something about it. We can’t stay in France doing nothing,” Schmitt said. “This attack was against French people, against Muslim, Jewish, Christian, everyone. These guys just don’t care about what is your religion, where you’re from. They just kill you. So we have to react right now. That’s why I’m really proud of that, that France now is taking the good measures to do something, at once.”

One of the most concerning outcomes of this event for Kirschner is the probability of a backlash against Muslims, refugees and immigrants.

“Something like 25 governors came out and said we’re not going to accept any refugees, even small children…and certainly a lot of Europeans are also engaging in rhetoric of ‘well this was a Muslim attack and therefore all Muslims are dangerous’ when of course it’s really a minuscule fraction of people who support this type of ideology,” said Kirschner.

But Schmitt reiterated his perspective that this is a time for people to come together, not to turn against one another.