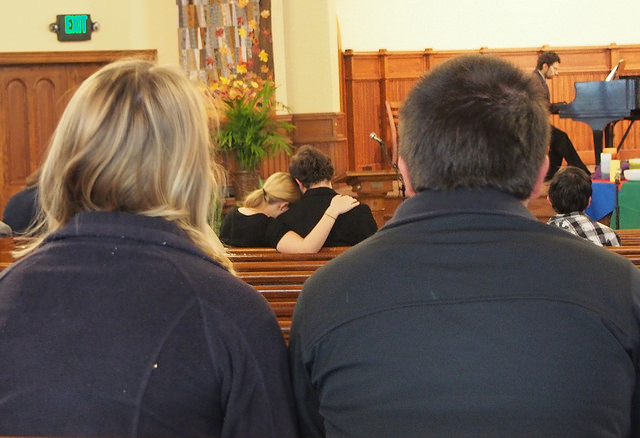 Chloe Carter, ’18, the former roommate of Hannah Morris leans for comfort on the shoulder of Troy Dinga, ’17, during the memorial in Ford Chapel on Saturday, Nov. 14, 2015.

A memorial service was held for Hannah Morris on Nov. 14 in Ford Chapel. Morris, who would have graduated with the class of 2017, was struck by a car on North Main Street on Oct. 29, and died hours later from her injuries.

Morris’ service opened with music played on the piano by Alexander Marrero, ’18. Jane Ellen Nickell, college chaplain, gave the welcome for those in attendance.

“We come together in grief, either because we knew Hannah personally, or because we feel deeply as members of the Allegheny community,” said Nickell.

Nickell shared other people’s memories of Morris, saying that Morris had loved baking and origami, and would hand out cupcakes to her stressed peers during finals.

President James Mullen also spoke, addressing the day after Morris’ accident when the college held a gathering for community members to receive and provide support.

“I felt cold that day, cold inside,” he said.

Mullen said since the accident, members of the Allegheny community have come together to support each other.

“We’ve carried each other,” he said. “In that process of carrying each other, I hope we’re getting closer to that place where we can smile when we think of her and what she meant to us.”

Chloe Carter, ’18, was Morris’ roommate in Caflisch Hall. She and Gabriella Belt, ’17, both shared poems to honor Morris, who was not religious, but had a love for literature.

“She gave me the honor of asking me to be her academic adviser, and I was happy to oblige,” he said. “I wish I’d known her better.”

Visiting Associate Professor of Psychology Robert Hancock, who had Morris in his statistics course, described her as good-natured about what life had given her, joking about how she coped with using right-handed desks as a left-handed person.

Vlad Pankiv, ’17, who was Morris’ boyfriend, read the poem “Ascension,” by Collen Corah Hitchcock in Morris’ honor. Later, he shared how difficult her death has been for him.

Troy Dinga, ’17, sang while Theresa Buczek, ’17, played the guitar to Leonard Cohen’s “Hallelujah,” after which Nickell shared what Morris’ father, Jamie Morris, had said at the service held for Morris in her home state of Tennessee.

“Part of the beauty of Hannah is that she always knew who she was, and that was someone very special,” Nickell quoted. “She got all of us doing things we never expected. Embrace your inner Hannah.”

Nickell invited everyone to a continued discussion of their memories during a reception in the Ford Chapel Oratory following the service.