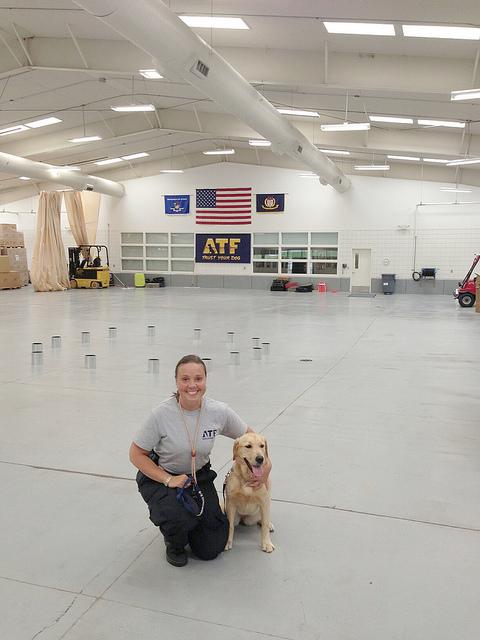 Stephanie D’Andrea poses with Kara after they were paired together in July of 2014.

Bureau of Alcohol, Tobacco, Firearms and Explosives Special Agent Stephanie D’Andrea, ’97, said her experiences as a political science and German double major at Allegheny led her to becoming a canine handler for the ATF.

While a student at Allegheny, D’Andrea participated in different activities across campus, according to Phil Foxman, ’90, current associate vice president for Development and Alumni Affairs. He formerly interacted with D’Andrea in the Office of Student Involvement when she was a student.

“She was a [Resident Adviser], member of Lambda Sigma, served on the Honor Committee, was in ASG, participated in Habitat for Humanity and Alleghenians Committed to Service, attended the National Collegiate Leadership Conference…the list goes on and on,” Foxman said.

After D’Andrea’s years at Allegheny, she went on to earn a Master of Science in criminal justice from Northeastern University, graduating in 1998.

D’Andrea was later hired as a special agent for the ATF.

“I was hired in August of ’99 in the Worcester, Massachusetts field office, part of the Boston Field Division, and I have been with [the ATF] ever since. I work in the New York Field Division currently,” D’Andrea said.

D’Andrea said she has been on the protection detail for the Director of the ATF for three years and has worked undercover on short-term and long-term transactions.

D’Andrea currently works as a canine handler with her canine partner, Kara, who is a search enhance evidence K9 according to Charles Mulham, public information officer, for the New York Field Division.

D’Andrea’s job placed her in several different types of jobs ranging from high profile work—for example, Pope Francis’ recent visit at the Capitol Building in the District of Columbia—to  general searches of buildings.

“Everyday is different, my schedule is a little bit crazy, unpredictable. We get calls from other ATF agents, but I also work a lot with other agencies and local police officers who need assistance in searching for the things [Kara] is trained to find—everyday is a new adventure,” D’Andrea said.

Kara, a golden Labrador retriever, is trained to find 19,000 different explosive compounds, according to D’Andrea. D’Andrea and Kara train 365 days a year to ensure Kara is prepared for anything that may happen.

D’Andrea said that Allegheny has enabled her to express herself effectively in writing and oral presentations. She also said it has helped her to become a more independent individual.

“First of all, I love Allegheny. I am so glad I picked Allegheny. It was the perfect choice for me. I think in general, Allegheny gave me confidence—I was exposed to a lot of different groups and organizations. It made me more independent than I already was,” D’Andrea said.

Foxman, who is a graduate of a liberal arts college, believes that the liberal arts educational style has allowed D’Andrea to find success.

“The nature of Stephanie’s work is such that she is continually learning new things, adapting, problem solving, communicating clearly and thinking quickly. I think those are hallmarks of an Allegheny liberal arts education,” Foxman said.

“I believe that [a liberal arts education] is an education that makes a person more well-rounded, someone who can sit in an open-forum and hold conversations with various people on various topics because they have a working knowledge of those topics. I know Stephanie is well-rounded and I have to believe you can attribute the liberal arts background she has to that fact,” Mulham said.

Currently, D’Andrea works in the New York Field Division and continues to do so with Kara at her side, aiding different agencies and ensuring the agents are safe as they enter buildings.