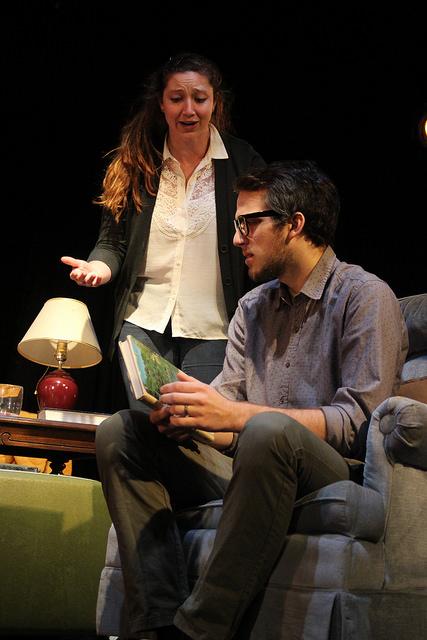 Student Experimental Theatre will present its first full length play of the fall semester, a production of “August: Osage County.” The play will be showing on Friday, Nov. 13 and Saturday, Nov. 14 at 7 p.m. in Little Arter Theatre.

The play is directed by Stephanie Engle, ’16, and consists of mature and sensitive topics.

“‘August: Osage County’ follows the story of the Weston family as they reunite at the family home following the patriarch’s disappearance,” Engle said.  “However, like all family reunions tend to go, trouble ensues.  But this time is happens in very sinister ways.”

Autumn Parker, ’16, acting as Violet, is the matriarch of the family.  This is Parker’s first show with S.E.T. although she has been in two previous plays with Playshop Theatre.

Parker said after the father of the family goes missing, it leads to chaos in the family and reveals a lot about all of the characters.

“The family includes three daughters,” Parker said.  “In this recollection of coming together, a lot of truths come out from Violet and her daughters and how they feel about each other.”

Parker said after these truths are revealed the cast goes awol.  People are slapped, plates are thrown and people crawl around stage.  She said that the hardest part, for her, was learning to let go and fully take on her character.

“The most difficult part of the rehearsal processes has been allowing yourself to get crazy and comfortable,” Parker said.  “This play really challenges all the characters to get out of their comfort zone and to say absolutely horrible things to people around them.  Especially for my character because she’s a drug addict so I really have to allow myself to just be crazy and let things fly out of my mouth that I would never say in real life.”

While having to learn to get comfortable on stage in a crazy role was challenging for Parker, she said that it has also been one of her favorite parts because of the learning curve.

Engle said those in charge of the play initially had trouble casting the play because of the large size of the cast compared to other plays.

“Thankfully we had some really wonderful people come in and  help us out and I think they are doing a stellar job in their roles,” Engle said.

Engle said that on the other hand, the play has proved to be an extremely satisfying feat.

“Like all shows, the process in itself is rewarding enough for me,” Engle said.  “Getting to see each actor develop their characters on stage is a highlight in my eyes.  Plate smashing might also be on that list.”

Rachael Robertson, ’17, the public relations chair on the S.E.T. executive board, said that it will be interesting to see how the audience perceives the show.

“It’s a very mature show and I’m excited that we have taken on such a large production and worked with our cast through it,” Robertson said.  “That makes it stand out from some of our other past productions.”

Robertson also said that their main goal is to have the audience walk away feeling like they saw a great production.

Engle said that she wants to showcase the talents and strengths of the cast and crew.

Admission to “August: Osage County” is free to all who want to attend.  Due to the mature content of the play, however, the S.E.T. board recommends that all in attendance are 13 years of age or older.