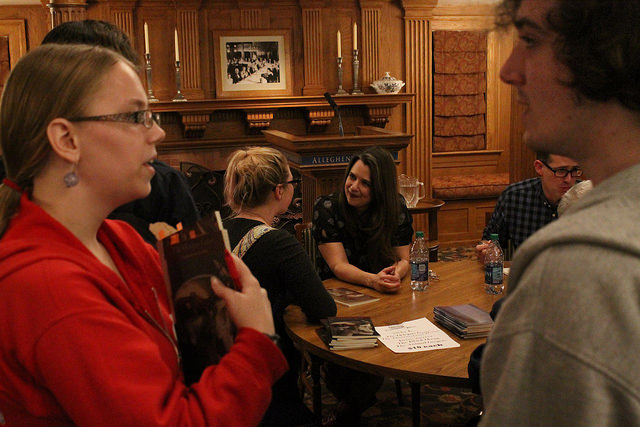 Nicky Beer and Brian Barker hold a book signing after a poetry reading in Tippie Alumni Center on Thursday, Nov. 5, 2015.

The English department invited the poets Brian Barker and Nicky Beer to share their poetry at the Single Voice Reading at Tippie Alumni Center at 7 p.m. on Thursday, Nov. 5, 2015.

They presented several poems featured in their books “The Octopus Game” by Beer and “The Black Ocean” by Barker. Students and faculty that attended got a chance to get an inside view of Barker’s and Beer’s works, getting a chance to get books signed and ask questions.

The Single Voice Reading is a chance for Allegheny students and the Meadville community to  get inspired by work like Barker’s and Beer’s. The successful writers explained their technique on how to write and publish collective books of poetry. They advised students to use the opportunity to gain experience in creative writing. Beer recommended attending the reading to gain special skills that could otherwise be overlooked.

“It’s an opportunity to do things you might not do otherwise,” said Beer.

In addition to their books, the poets presented a variety of new poems which will be published in their next works. Beer motivated listeners at the Single Voice Reading to engage specifically in the reading of her last poem, “Rimbaud’s Kraken.” The poets were available after the event to sign participants’ copies of their books.

During a Q&A prior to the Single Voice Reading, Barker and Beer visited a writing poetry class taught by Christopher Bakken, chair of the English department. Students had the chance to ask specific questions about the poets’ work as writers.

The class was interested in Beer’s specific images she had in mind while writing several poems about octopus. Beer expressed her infatuation as the birth of an obsession with the cephalopod.

Beer described her career as predestined. Although she started as a sociology major, Beer always  concentrated on creative writing and literature which later became her main focus of her higher-level degrees.

“I’ve been writing poetry my whole life. It was just something that I did,” said Beer. “Some people knit, some people know how to make really awesome fries, and I write poetry.”

Barker explained his career as a journey. His late obsession for creative writing arose while he was a junior in college. He was in two poetry courses which he said shaped his way. The poet described his personal passion about poetry as a medium to compose oneself in a complex world of rush. Barker values the ability of creative writing to evaluate and diminish precipitancy.

“There is a way that poetry asks us to slow down,” said Barker. “It’s like looking at a painting.”

Bakken said that while he was in college he had a chance to meet successful and well-known poetry authors that gave him similar advice to the suggestions Beer and Barker gave the participants at the Q&A and at the reading. Bakken said he remembers telling famous author, Richard Howard, that he did not know if his poems were good enough and asking for his expertise.

“It was one of the stupid moments where I was just star struck,” Bakken said.  “I told him it was so great working with him and that I write all these poems and I just didn’t have any confidence about them and I feel like I don’t know if they’re any good and he just stopped me and said ‘My dear, confidence has nothing to do with it and it never will.’ That’s a guy that’s won a Pulitzer Prize.”

The next Single Voice Reading will host the poet Catherine Chung. Chung will present a variety of poems published in her book “Forgotten World” at Tippie Alumni Center on Thursday, Feb. 4, 2016 at 7 p.m.