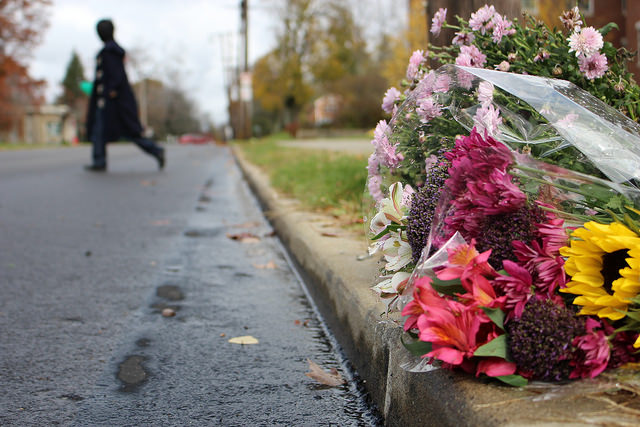 Flowers began accumulating on the side of the road on Oct. 30, 2015 the morning after Hannah Morris, ’17, was struck by a vehicle on North Main Street. Morris later died at Meadville Medical Center.

Hannah Morris, ’17, was struck by a vehicle while crossing North Main Street in front of North Village II in the evening of Oct. 29, 2015. Morris, who was not in a crosswalk at the time, later passed away at Meadville Medical Center from sustained injuries.

Three of the students on scene within minutes of the of the accident were roommates Jocelyn Serafin, ’17, Brianna Martig, ’16, and Sarah Shindler, ’16. Shindler said she heard the impact of the car because her North Village II  apartment window was open. She gathered Martig and Serafin and they all went out to see if they could help.

“It was so dark out there that I couldn’t see [Morris’] face,” said Serafin.

According to the three students, a nurse who happened to be driving by got out of her car to tend to Morris. Serafin said Morris was responsive by the time they reached the street.

“We could hear her talking,” she said.

Martig said she called campus security and others dialed 911. Martig said that several other drivers had stopped and that one parked his car at the top of the street to prevent others from entering the road.

The students said that the driver who struck Morris also made efforts to help until paramedics arrived, after which he broke down crying.

“She was a very nice girl, always happy,” Longstreth said. “She will be missed.”

Timur Dikec, ’16, the community adviser in Caflisch, the dorm in which Morris lived, said he was awakened around 2:45 a.m. on Friday, Oct. 30 by a call from Jen Foxman, assistant dean and director of residence life. Foxman told him the news of Morris’ death. Dikec said he was shocked after how hopeful the initial news had been.

“For a while, the story was that she was OK,” he said. “It’s such a sudden change to go from hearing that someone is hurt, but should be OK, to going to they’ve passed away.

“[Foxman] said that after the initial diagnosis, there were complications. There were some things they didn’t realize and that she had passed away.”

After that, Dikec said he and Foxman gathered the resident advisers and explained to them what happened.

“It was all over their faces, just disbelief—like how could this happen,” he said.

After breaking the news to the RAs, Dikec said he spoke with Morris’ RA, Brittany Hunt, ’16, individually, and that she had some ideas about ways to reach out to the community.

Dikec said the residence life members notified people they could identify as closest to Morris first, such as her roommate and her boyfriend, and counselors were sent to their rooms immediately.

A general email was sent out by Foxman to the Caflisch residents around 6:45 a.m. on Oct. 30 so that they knew before the general campus community.

“We wanted to make sure that each of you received the message before it went out to the whole community,” Foxman wrote in the email.

Dikec instructed his RAs to be in their rooms as much as possible for the following week with open doors in case anyone wants to talk with them. If Morris’ family decides to have a memorial service on campus, Dikec wants to hold a breakfast beforehand for his residents and to travel to the service together.

“We know that there’s not really a lot we can do to make the situation better now, and that it’s going to take time, but we want to make sure people know that if they are looking for help and they want help, we’re here to support that,” Dikec said. “If we have the means to do that then we’ll do everything in our power to make them feel safe and taken care of.”

In an email sent out by the college’s president, James Mullen, he wrote that he had sympathy for those who are grieving.

“I realize how heartbreaking this news is for all who knew Hannah,” he wrote. “Please know that our hearts break together.”

“We’re just trying to help our community get through this right now and support each other, especially our students,” Stuebner said.

Interim Dean of Students Jacquie Kondrot said the school is hoping to focus on the students, and that she shares her condolences with Morris’ loved ones.

“We are deeply saddened by the tragic loss of Hannah Morris,” Kondrot said. “Our focus right now is on our students, to make sure that they have the support they need at this time of great loss to our campus community. Our thoughts are with Hannah’s family and her many friends.”

Mullen reminded students that counseling services are available at any time of the day, and that students can contact the Office of Spiritual and Religious Life if needed.

A gathering was held at Ford Chapel at 2 p.m. on Oct. 30 for community members to seek and provide support.

Since the accident, there has been a revival of a petition started by Stephen Foreman and his wife, Jennifer Foreman, a visiting assistant professor of psychology at Allegheny. Their petition began after their son was hit and injured by a car while crossing North Main Street in 2013 and calls for a change to the traffic regulations on this street.

Since Morris was hit at night, the lighting on campus and particularly on North Main Street has come under scrutiny.

According to Stuebner, Physical Plant takes the lead on where to place lights on campus. It also receive tips from the Administrative Executive Committee and from Allegheny Student Government representatives.

According to ASG President Haley Riley, ’16, representatives take a walk through campus to evaluate the lighting once a semester.

“Basically we go on a lighting tour and see which areas of campus are darker,” Riley said. “One of the petitions that we’re working on and our director of student life is working on is increasing the lighting at the call boxes.”

Cliff Willis, the director of physical plant, said although the lighting tour has not yet been done for the fall of 2015 semester, it was done once in fall of 2014 and once in spring of 2015.

Willis said physical plant has begun installing LED lights on campus, which are brighter and have a longer lifespan than the lights they have used previously. According to Willis, Allegheny owns the lights on the west side of North Main Street, which is outside of North Village II, but not the east side by Oddfellows.

Because North Main Street is owned by the Pennsylvania Department of Transportation, any changes to the speed limit would have to be made by PennDOT, according to Pennsylvania State Representative Brad Roae. He said any proposals for street changes would have to be brought up by the City of Meadville.

Andy Walker, the Meadville City manager, said that the school has created a proposal for a traffic study.

“The mayor received a letter from the school…requesting that the speed limit be studied,” said Walker.

Roae said he plans to be part of the conversation that happens after the study concludes.

“The results of those [studies] I’m sure will spark conversations,” said Roae. “I’m trying to organize a meeting…where everybody involved can sit down and talk about what can be done.”

Roae said he hopes the study will be conducted and concluded promptly.

“There’s no guarantee on this, but I’d hope that within one month they could conduct the study and be ready to talk about it,” said Roae.

In February of 2015, Allegheny was granted the Redevelopment Assistance Capital Program grant, which is $2 million. Stuebner said the funds would be going toward community improvements, one of which will be lighting on campus.

“A chunk of that grant will go to continued improvements to [North] Main Street,” she said. “Some of them are just cosmetic, getting the poles down and making it look prettier, but some of it will just be continuing to try to address the lighting issues.”

Stuebner and Willis said the college has made as many as three informal requests to have the speed studied on North Main Street.

“I’ve been on campus for seven-and-a-half years and I’ve been in a couple of meetings with PennDOT during that period of time, and the city’s been present, and we’ve introduced the topic,” said Willis.

Willis does not believe a formal request was ever brought to the city or to PennDOT, and Walker said he does not have records of one.

One step the college took at the beginning of the Fall 2015 academic semester was emphasizing crosswalks. This change was approved by PennDOT, which Stuebner said was largely because the college paid for it and North Main Street was being repaved anyway.

Willis said he believes that making seven of the crosswalks on North Main Street brick and highlighted by reflective white stripes on either side has prompted students to use them more.

“I think our crosswalks are nicely marked and as I say I think people have been better about using the crosswalks since they’ve been enhanced this way,” said Willis.