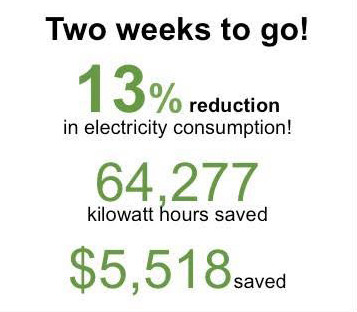 Allegheny College is currently in the third week of its annual energy challenge. At the end of week two, energy usage has been reduced by a total of 64,277 kilowatt hours and $5,518 has been saved as a result. The challenge spans four weeks of the year and has been running for six years.

“It’s a yearly event, where for roughly one month, so four weeks, the school has a campaign to reduce electricity consumption as much as possible across academic buildings, dormitories, really the whole campus,” said Bennett Gould, ’17.

Gould is running this year’s challenge along with Sonya Korzenewski, ’18,  as substitutes for sustainability coordinator Kelly Boulton who is on maternity leave. The two have split up duties with Korzenewski focusing on the publicity side of the challenge and Gould working on data collection and analysis.

“We are able to compare [results] to the baseline preceding the challenge and from that calculate energy savings in terms of the energy itself that has been saved, how much money has been saved [and] percentage reduction,” said Gould. “The ultimate goal of the challenge is to say this is how much money we saved over the course of the four weeks and then reinvest that money into various campus sustainability initiatives.”

Savings from the 2010 to 2013 challenges were used to install a total of 24 solar panels on the roof of Steffee Hall of Life Sciences. These panels provide seven kilowatts of combined solar power. In 2014 the money was used to fund the installation of 11 new filtered water refill stations around campus, which are in the process of being installed.

This year’s money saved from the challenge, along with donor funding will be used to invest in a fleet of electric pedal assist bicycles, renewable chargers for the batteries for the bicycles and a bike shelter. The bicycles will become part of the campus bikeshare program fleet.

The exact model of bicycle has not been determined yet according to Gould, but all have some form of battery and motor that can be used to assist with pedalling.

“For example, if you ride downtown and then you’re struggling to get back uphill, you engage the electric assist and it helps power its way back up,” said Gould.

Currently the bikeshare program has a fleet of about 15 bicycles according to Gould, which are housed at the library. Students are able to check out a bicycle for a week at a time, and the process will remain similar for the new electric pedal assist bikes.

“It’s not just saving and reducing our consumption for the sake of reducing consumption,” said Gould. “It’s more about having fun events and really reinvesting that money into the campus in a project that students care about, that students have said ‘Hey this is something we want’ and that is visible to students.”

Every year various organizations and groups on campus host events throughout the challenge. Some events this year included Grounds for Change Unplugged Open Mic, Meditation Club’s Yoga in the Dark, the Outing Club’s Night Hike and Dumbledore’s Army’s Glow in the Dark Quidditch.

For the last week of the challenge, Allegheny Student Government is holding its meeting in the dark and the Astronomy Club is hosting S’mores and Stargazing at Robertson Field Pavilion on Nov. 3.

To help engage the campus, weekly results of the challenge are posted around the college with summaries of how the challenge is going and specific breakdowns of energy reductions by dormitories.

“So they’re not pointing their fingers at people and saying ‘You need to turn of the lights,’ but their idea is that they create a fun way to reduce electricity consumption using fun theory and positive behavior changes by rewarding people rather than saying ‘Don’t do this,’” said Wilson.

Projects this year included creating awareness around fall break shutdown and tabelling at the campus center with different trivia games for students to play.

Wilson said the 110 class is important because it is often taken mostly by freshmen and it not only increases their own awareness about the energy challenge and energy consumption on campus but also teaches them to build new habits they can carry with them through through their time at Allegheny.

“I think it’s really cool because changing behavior is something…that’s really, really difficult, and this challenge shows that behavior can actually be changed and that it has a lingering effect for even next semester and next year,” said Wilson. “By the time students are seniors are lot of them are pretty conscious about the way they are living and they way they are consuming electricity…but I think it’s unique in the way we’re trying to positively change behavior rather than just scolding them.”

“There are a bunch of signs in my dorm, so if I go to the bathroom for even five minutes I think about turning my lights off when I’m gone,” said Bell. 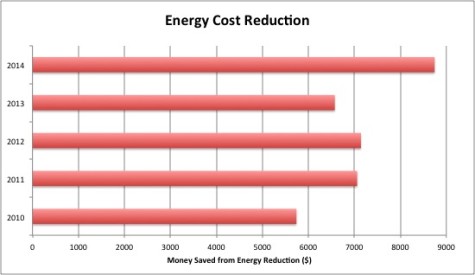 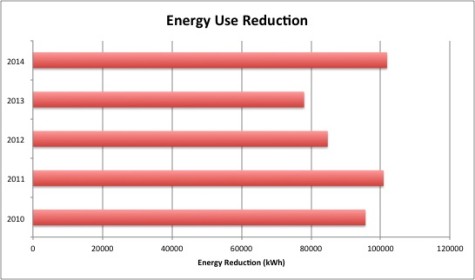