Behind the scenes at Parkhurst Dining 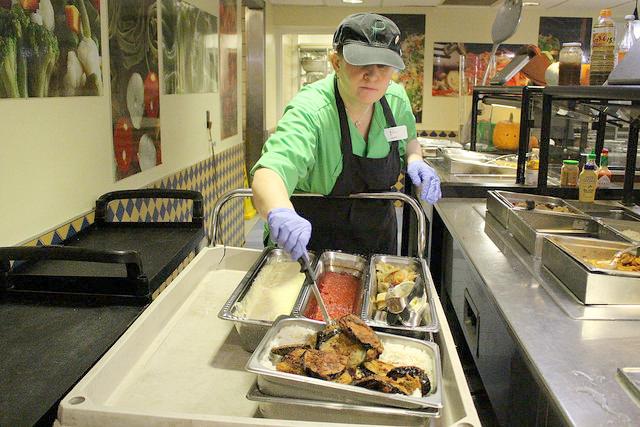 Patty Ann Catilina, a server, cleans up leftover food from a buffet at Brooks Dining Hall after the dinner rush on Wednesday, Oct. 28, 2015.

Parkhurst Dining Services offers students a wide range of themed-dining experiences about once a month throughout the academic year. The staff strives to provide a variety of choices aside from daily options.

Lori Chiodo, director of retail dining, explained what her position entails at McKinley’s Food Court. She has worked for the dining service since Parkhurst came to campus seven and a half years ago and has been in her current position for two and a half years.

“I run the whole facility, so I have a hand in the menu planning, ordering, staffing, special events, whatever kind of things we want to do,” said Chiodo.
Bill Watts, general manager of Parkhurst Dining at Allegheny College, explained his position on campus.

While he is the manager, Watts leaves event planning to the discretion of the directors.

“I’m responsible for overall food service,” said Watts. “I also at the same time need to give the directors room to grow what they are doing and plan and do the special events and take the glory for them. They’re doing all the hard work, the planning, the logistics and everything to make it happen so they deserve the glory for it.”

The dining staff decides the themes and what will be served during the meals. The entire process is a team effort, requiring participation and brainstorming ideas on all levels.

“We just sit around, ‘What are we going to do?’” said Chiodo. “For October it was, ‘Well Christopher Columbus Day, we’ll take that week and do Italian-American.’ This coming month instead of turkey, because they’ll do a huge turkey dinner down at Brooks, we’ll do a chicken wing bar which we typically do almost every November and everybody gets excited about buying chicken wings.”

The themes fluctuate depending on popularity and what time of year it is. Chiodo said that the themed meals have been around for at least the last five years. The staff sets a goal to produce a themed meal at least every other month, if not more.

“They’ve been pretty consistent, sometimes they go in and out,” said Chiodo about the themes chosen. “I think even as great as it is, our biggest complaint is, even with marketing out weeks ahead of time, that people get upset that the stations close for a meal period.”

The manner in which staff hears comments from students is not always consistent. Chiodo said the two main ways they receive feedback is from comment cards or from students themselves.

“We hear people waiting in line,” said Chiodo. “We have some naysayers worried about the line closing, but more often than not the comments are ‘Oh this is great’ we already heard the other night at soup bar ‘When are you guys doing it again, I have to get here earlier next time.’ I think we got six cards on Oktoberfest which was awesome because the staff gets to see them as well and they feel better about going the extra mile. They have fun that way and more people want to do it in the future.”

The dining staff’s main goal is to offer diverse dishes to the campus. While most of the comments have been positive, not all students are happy with the themed meals. Sam Green, ’17, shared her opinion on the high prices of the themed dishes.

“I feel like it’s overpriced just because it’s different food and for the portion size it’s just too expensive for the amount of food you actually get,” said Green. “By the time those events happen people don’t have enough Kins money.”

Chiodo said that she hopes students enjoy the meals. The themes are a chance for staff to offer some variation.

“We just do it for people so they have something different,” said Chiodo. “We have the same things every single day, I know being here all year long, by the time you’re an upperclassman, as much as you love coming and having a burrito every day or every third day, to see something else whether you eat it or not is a refreshing change.”

In order to find information about the themes and dates of meals offered in McKinley’s, students can look in multiple places.

“There’s several places, we post them in [McKinley’s], we had the soup bar this past week and we had signs up only about a week ahead, but before that at the beginning of the month we have monthly marketing calendars that are available in [McKinley’s], and if you go to our dining services website, there is a link where you can get to the market calendar and see it,” said Chiodo. “Within the 48 hours up to [the themed lines] we put it on MyAllegheny.”

Chiodo and the rest of the dining staff enjoy seeing how students are excited by dining experiences. She said they want to make eating on campus as unique as possible.

“I like seeing the excitement when the people come in and it’s something different, they’re actually excited about it or they say they’ve been waiting all week,” said Chiodo. “We’re here everyday working, trying to make it look nice, but I’m sure it’s not a priority to a student during midterms or when finals are approaching, but to be able to take you out of that world for a minute and get you excited about something else, it’s really great.”

Watts said the kind of service that Parkhurst strives to provide Allegheny is first-rate. He pointed out the differences between other food companies to Allegheny’s.

“When you look at different styles of contract food companies, some are around just to pump it out, some just to heat it up and serve it,” said Watts. “We’re more of an ingredient based company. The drive of our company is to make sure that we provide dining services that are as fresh as we can, sourced as locally as we can, realistically and try to enhance the students’ lives instead of just providing pizza and wings.”

Chiodo announced the popular themed meal that students will see next month.

“Nov. 18 we will have a chicken wing bar in [McKinley’s],” said Chiodo. “We’ll probably have six different sauces available, celery, carrots, bleu cheese, ranch, that kind of stuff to buy additionally. That will be from 5 p.m. to 8 p.m. Pasta will be closed, so we will have some signs out letting people know.”

Chiodo said that the entire Parkhurst staff is available for anyone with questions or concerns. Students can contact Chiodo, Watts, Stephanie Lang, director of board operations, or any of the chefs via email or the Parkhurst website.