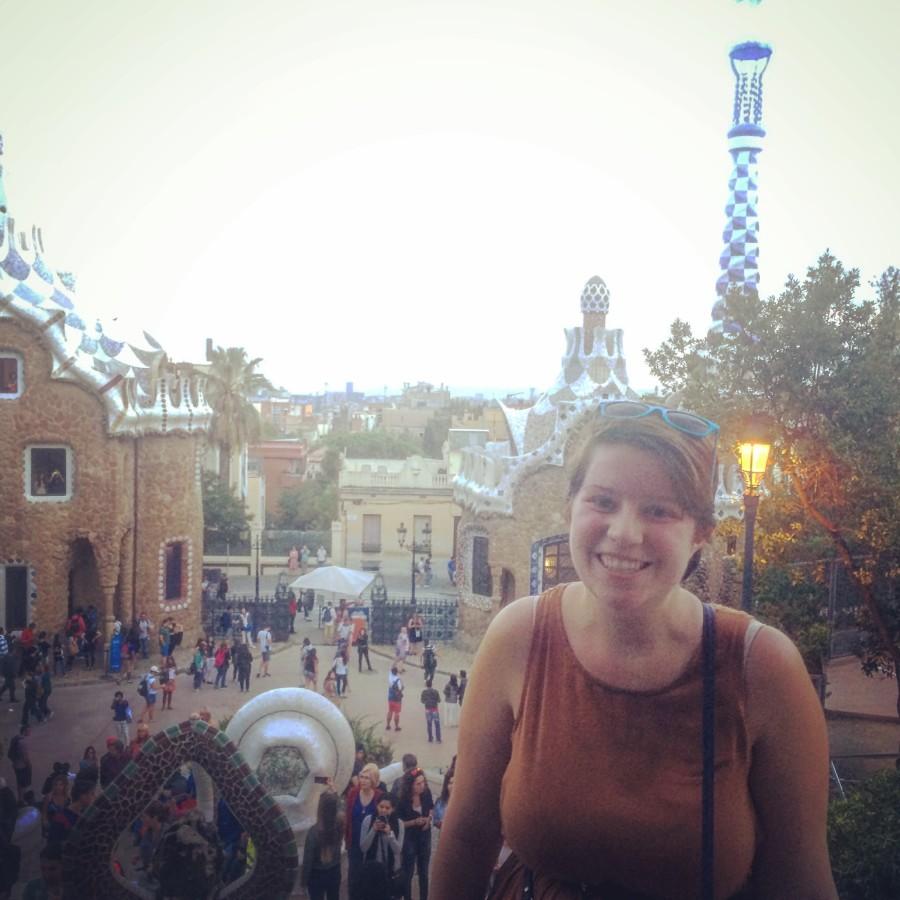 Amy Currul, ’17, visits the Parc Guell, one of her favorite spots in Barcelona.

Hey everyone! My name is Amy Currul, and I am currently a junior. This semester I am studying abroad through Antioch University’s WGSE program, which stands for Women and Gender Studies in Europe. Over the course of this semester, I will be studying abroad in Utrecht, the Netherlands; Berlin, Germany; Prague, the Czech Republic and Krakow, Poland. The semester began in Utrecht, a college town half an hour outside of Amsterdam.

Utrecht is the smallest of the four cities, and most of the activity is based around the local university. There are bikes everywhere and we are only a couple blocks away from the Oudegracht, the main canal that runs through the city. It is great when you get lost; just follow the canal and you will always find your way back! We had the amazing opportunity to tour the city by canoeing on the canals, which is an experience I will never forget.

In the three weeks that I was in the Netherlands, I went on a number of cool day trips such as biking out to a castle, hopping on the train to Rotterdam, and of course, spending just about every weekend in Amsterdam. There were a few bumps in the road, and I got lost a few times, but it felt so liberating to be able to explore by myself and I had an amazing time!

Next stop was Berlin, a huge city with tons of things to do and a solid public transportation system. I went to the East Side Gallery and the remainder of the Berlin Wall, which was beautiful and visually striking. I had a week’s worth of classes at the world-famous Humboldt University, best known for its physics department where Albert Einstein studied! The gender studies center and the lectures I heard were enriching and thought-provoking. I have been fortunate with all of the guest lectures I have gotten to hear this semester.

I spent one of my Saturday afternoons at the Tempelhof park, the sight of a former airport. On a gorgeous Saturday afternoon, the park was packed with families, runners and kite enthusiasts: it seemed like just about everyone in Berlin was there. I also visited the Olympic Stadium in Berlin, just like I did in Barcelona, Spain.

Speaking of Barcelona, we were given some money out of our tuition back in person, so that we could travel anywhere we wanted over our fall break. Some of my classmates went to Athens, Greece; Paris, France or Copenhagen, Denmark. Two of my friends and I went to Barcelona. In four days, I went to the Sagrada Familia, a famous cathedral designed by architect Antoni Gaudi, the Palau de la Música Catalana, a concert hall, Estadi Olímpic Lluís Companys (used when Barcelona hosted the Olympics in 1992), and the Parc Guell,a public park system also designed by Gaudi. I also lay on the beach, sat in cafes, and walked around, soaking in the beautiful city surrounding me. It was both busy and not, fast and slow, exciting and tiring. In short, it was a lot.

I think the best way to get to know a city is to walk around. No headphones, no camera, no schedule, and no destination. Just take some time to walk and listen to the sounds of the city, take in the different smells, sights and feelings you have. You’re not just seeing it at the surface, but really experiencing it.

Prague is also known for its outstanding architecture, so just walking around and admiring the buildings is already some pretty good sightseeing. Our classroom is on a gorgeous canal, so I am spoiled with the best views of Prague walking to class every day, or just from the windows of my homestay.

I am fortunate enough to have been to Europe multiple times already in my life, but only for short trips, no more than ten days. An entire semester is a different monster to tackle. I am excited for this new adventure, but I have noticed myself missing Allegheny more than I thought. Being homesick is a totally normal part of adjusting to abroad life, which is something I am trying to embrace.

It is weird being here when my friends are at Allegheny, living life as usual. It has definitely been hard not being able to stay involved in the things I love, such as Allegheny Student Government or WARC or Overkill, because I am not on campus this semester. Of course, this is an amazing opportunity that I am fortunate to have, but that does not mean I do not miss campus. It has been interesting adjusting to life abroad, but I cannot wait for the rest of this grand adventure ahead of me!