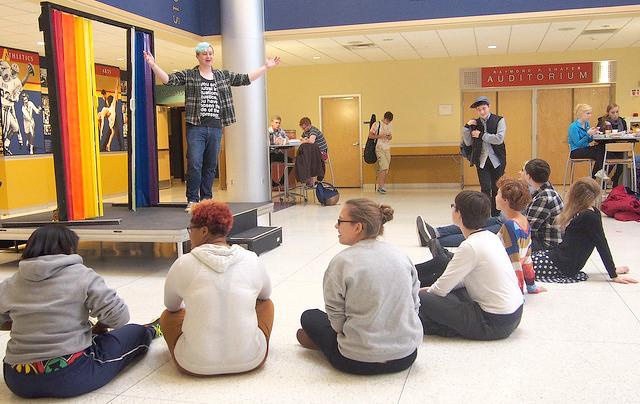 In the campus center lobby on Friday, Oct. 16, 2015, Queers and Allies hosted an event where people could come out by walking out through a set of rainbow doors.

Queers and Allies hosted a week dedicated to the safety and comfort of students on campus and to celebrate the stories of the Allegheny LGBT community.  Coming Out Week ran from Wednesday, Oct. 14 through Thursday, Oct. 22 and is centered around National Coming Out Day which fell on fall break this year. With the help of several other Allegheny clubs and organizations there were several events to commemorate the week.

Connor Racine, ’16, president of Queers and Allies and the director of diversity and inclusion on ASG, was a main coordinator of the week’s events.

Racine said in past years the week has been dedicated as a day to remember those who have had a difficult time in coming out or struggle with their sexuality.

This year Racine wanted the week to be more of a celebration that also created a safe space for those who struggle with their sexuality and gender.

“Instead of focusing on that somber, mourning energy we’re trying to change it to also have some positive celebration of lives,” said Racine.  “That’s something that has come out of conversations I’ve had with all of these groups I work on.”

KJ Sweet, ’16, vice president of Queers and Allies, said that this year the events that took place were different than past years because there was more of a campus-wide collaboration.

“We had several intersectional events that we have not had before, such as the talk with Union Latina and Queer Sex Ed with ReProCo,” said Sweet.

Cara Brosius, ’16, the major events coordinator for Queers and Allies, said that the week’s events included a cookout at the Queers and Allies house to kickoff the week.  There was also an intersectional discussion with Union Latina, a ceremony where people were able to come out and share their stories and a dance that resembled a high school dance for those that were unable to enjoy those experiences in high school.

Brosius said that the week is important to the LGBT community and helps to show those who have not come out that Allegheny is a safe space to do so.

“It is important to dedicate a week to coming out because of the dangers and pressure that face some members of the LGBT community every day,” said Brosius.  “Being out can be refreshing for some people, but hostile environments prevent others from being open about their identities.  Having Coming Out Week lets us show support for all the LGBT people and intends to encourage people who are still in the closet.”

Sweet said that Coming Out Week helps to celebrate everyone’s story about how they got to where they are today.

“Listening to someone’s story is the first step to understanding them, their motivations, their struggles and how to better support them,” said Sweet.

Racine said that during Coming Out Week it is important that the support and sense of community that is fostered during the week is publically recognized.

“I think this week is important to Allegheny’s campus, not just because of the way Allegheny is, but because it’s important for all institutions to have concrete ways to show the appreciation and celebration of diverse identities and experiences,” said Racine.  “It concretely shows that our sexuality and gender identity minority groups on this campus are not willing to be separated off into small club spaces and just basically into slightly larger closets.”

Racine went on to say that it is important to show that the LGBTQIA+ community wants to be publicly recognized and not just tolerated but appreciated and loved for the diversity they provide to Allegheny’s opinions and values.