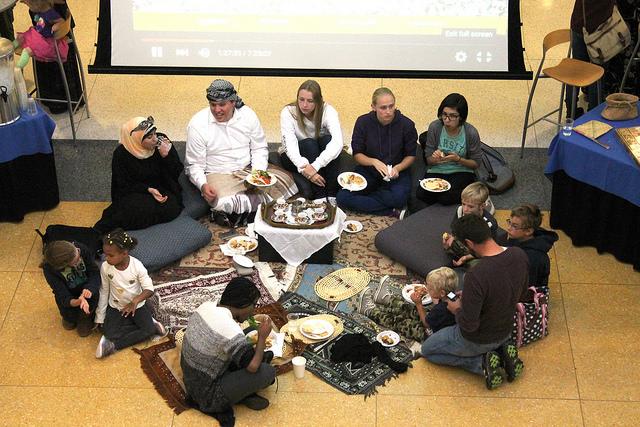 The Allegheny College and Meadville communities celebrated Eid al-Adha in the lobby of the Henderson Campus Center on Thursday Oct. 1.

Eid al-Adha is one of two main holidays in Islam.

The Office of Spiritual and Religious Life, the Arabic department and Project Nur sponsored the festival.

“It is the festival of giving—you give to charity, to community—and it’s the day of sacrifice,” said Tolossa Hassan, ’18. “Ibrahim was asked to sacrifice his son. God gave him a ram to sacrifice instead and this is why people sacrifice animals on this day. A lot of families will sacrifice just as Ibrahim did.

“You’re showing you’ll sacrifice anything to show you’re thankful for what you have. We celebrate, we pray, we go and see family. It’s the day of happiness. Children get candy, we dress up, get new clothes. Muslims all over the world will make pilgrimage to Mecca, which is called Hajj in Arabic.”

According to Sara Khadim, a Moroccan exchange student, how people celebrate the festival differs by country. The main thing that is constant across all countries is a morning prayer service called Salat el Aid. After prayer is the sacrifice of an animal, usually cows, goats, sheeps, rams or sometimes camels. In the afternoon people go and visit family and relatives and can take pieces of the animal they sacrificed with them.

The date of the holiday changes every year depending on the Arabic calendar. This year Eid al-Adha fell on Sept. 24. As well as celebrating at the festival on Oct. 1, Muslim students at Allegheny travelled to Erie, Pennsylvania on Sept. 24 to attend a morning prayer service. They also had a dinner together that night.

“At first I thought it was going to be very hard but it actually was a great experience,” said Khadim. “It’s my first time being away from family. It has a different taste with friends and the Muslim community. We were with other Muslims and went together to the prayer and met a lot of Muslims. We had breakfast as a family and dinner as a family.”

At the campus-wide celebration there were different tables with information about the celebration, including an area to get henna tattoos and to learn how write a name in Arabic. Music with a video of pilgrimage at Mecca played and there was a traditional area set up with cushions on the floors for people to drink coffee and eat Baklava. As well as this there was belly dancing for entertainment and traditional clothing from Morocco, Yemen, Syria, Jordan, India and Pakistan with a stand for attendees to try on clothing. There was also a catered dinner by Parkhurst.

Valerie Hurst, ’18, was impressed with the diversity of people attending the event.

“I see that there are so many different people here that aren’t Muslim that are involved in celebrating with their fellow students,” said Hurst.

Khadim said the campus-wide celebration was a great opportunity to introduce awareness of Islamic culture to the broader campus.