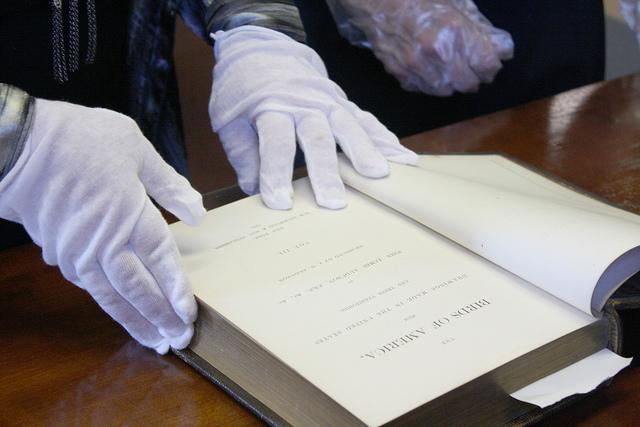 Allegheny College bought the Audubon books, which will be displayed in the speciality section of the Pelletier Library. Community members can view the books by scheduling an appointment with the special collections librarian.

Meadville resident Pamela Todd McMorran Fox and her husband John found history buried in boxes in their basement in the form of a rare set of books that had not seen the light of day for almost 20 years.

The books Pamela and John found in their basement are not only rare, they are also valuable. The complete set is an 1871 illustrated edition of James Audubon’s “Birds of America” and “Quadrupeds of North America.” The complete set of 10 books is valued between $15,000-20,000.

Allegheny College Special Collections Librarian Jane Westenfeld, said that what makes the books so rare is the color prints of the various birds and animals catalogued in the books.

“The images are absolutely fabulous, and people used to take the plates out and sell them,” she said.

Pamela explained the books were originally purchased by her great-grandmother. The books eventually found their way into the estate of Pamela’s aunt. Pamela inherited the estate upon her death in 1991, which included the books, hidden out of sight in the rafters of the attic.

Carefully tucked away, the books were missed when a book dealer came to appraise other items contained within the estate.

“The book dealer said there was nothing there,” Pamela said.

When Fox and her husband moved to Meadville from Michigan, the books came with them.

“They’ve sat now in an attic and in a basement,” she said. “They’ve sat down in that basement now for 20 years.”

The books remained in storage in the Fox’s Meadville home until the couple decided to clean out their basement earlier this year. They decided to have the books appraised and it was then that they learned of their true value.

Instead of selling the books, Fox decided that the Meadville Public Library could use the money, so she donated the books to the library.

“I could’ve taken the money, but it’s just better for them to have a good home and be in the community,” Fox said.

Fox said she came to the library in the spring and simply left the books on the front desk, telling the staff that the books had some value. She said she never intended for the library to keep them in its collection.

“Our intent all along was to donate them so they could sell them,” Fox said.

John Brice, executive director of the Meadville Public Library, said following Fox’s donations, it became clear the library did not possess the necessary facilities to preserve the books properly. Selling the books seemed to be the best option.

“At the same time, we wanted to make sure we could keep them in Meadville,” Brice said.

Brice explained that, in an attempt to keep the books in Meadville, the library reached out to Pelletier Library at Allegheny to see if it would purchase the books. Brice declined to comment on the exact amount paid by Allegheny but said it was within the range of what the set was valued.

“The Allegheny library was very generous,” he said.

While he was happy with the sale, the proceeds of which will go toward the cost of air conditioning repairs, Brice said having the books in the library was a truly unique experience. He said he would often look through the books when he had a free moment simply to enjoy them.

“It’s such a wonderful set to look at,” he said.

According to Brice, Pelletier Library will now be one of only 26 libraries in the world to have these books in its collection.

Pamela expressed her and her husband’s satisfaction at the placement of the books in Pelletier Library.

“We are really happy that the books have a good place to live, where faculty and students can utilize them,” Pamela said.

Westenfeld said the books will be housed in Pelletier’s special collections where it will be kept in a temperature and humidity controlled environment. The books will be available for viewing by appointment only.

“To have these all together, it’s just absolutely wonderful,” Westenfeld said.