Women’s volleyball at 9-4 this season 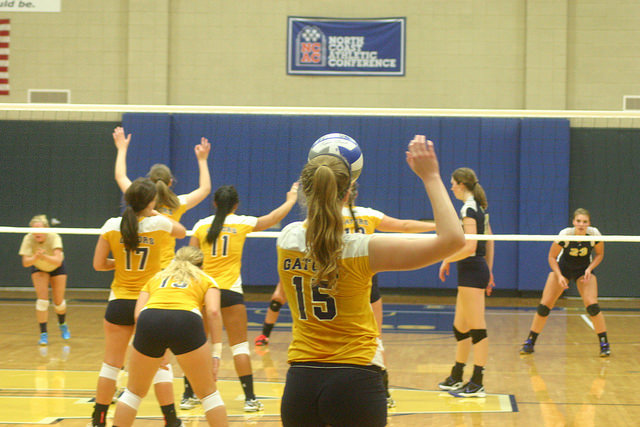 Sarah Swartz, ’16, serves the ball during the match against The University of Pittsburgh at Bradford on Wednesday, Sept. 23, 2015. The Gators won 3-2 against the Panthers.

The Allegheny women’s volleyball team is almost halfway through its season and have just begun tournament play with a record of 9-4.

“We have been very solid with our defense and side out game,” Sheehan said.  “We also control the tempo of the game very well.  This past weekend we saw some success with our points on serve percentage, our out-of-system success and our blocking well.”

Taylor Samuel, ’16, said that their success in tournaments and games is a direct result of the team’s hard work and dedication in practice.

“We work really hard at practice and are in the process of implementing new aspects into our game this year to keep ourselves competitive against the teams in our conference,” Samuel said.  “In addition, our defense has really stepped up this year because at this point in time we are nationally ranked second for defense among all Division III schools.”

Assistant Coach Quinn Wright said that the team continues to better themselves in all aspects of the game and is working on the areas they feel they need to improve.

“Our biggest area of improvement at this point in the season is offensive,” Wright said.  “We believe that if we can get our offense running at a higher level, we can be a very good team.”

Sheehan said that the team needs to focus on playing smart and continue to control some of the division’s best attackers.

“Our goal is to keep them under their attack average and keep them stressed with game tempo,” Sheehan said.

Samuel said that as the team gets further into conference play the team will have to work even harder to maintain their level of play.

“Our conference games are much more competitive and the level of play is more advanced,” Samuel said.  “Overcoming the adversity of beating nationally ranked teams requires a mental toughness that the entire team will have to showcase.”

As for the rest of the season the team is focused on their upcoming games and take what they have learned from past mistakes and use it to grow as a team and as players.

“The general goal for this team is to play a consistent style of volleyball with control and to keep confident during point runs,” Sheehan said.  “Staying aggressive with our core transition movement and tempo throughout a match.”

Samuel said the team’s sights are set on making it a long season in tournament play.

“The team’s goals this year are to excel further in the playoffs, maintain a passing average of 2.2, hit 20 percent as a team, have no more than 3 point runs from our opponents and to maintain great communication and energy during our play,” Samuel said.

The team’s next game is home on Friday, Sept. 25 against DePauw University.