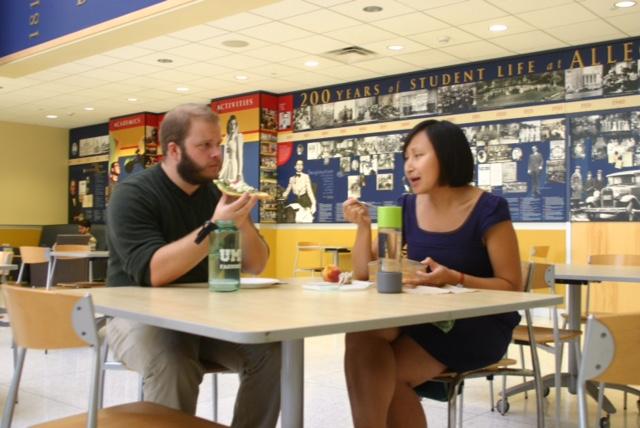 Assistant Professor of English Aline Lo said that, as a first-generation student, it was the little things that she did not know how to do. No one in her family had been to college, so she had nowhere to turn to with questions about classes, workload or even what she would need in a dorm room.

“It’s strange not to be able to talk to your family about your life,” Lo said.

This semester, Lo along with Assistant Professor of Psychology Ryan Pickering are working to create a group to help students who are dealing with the same things that they did as first- generation college students.

“We kind of planted the idea last year and now we are trying to get organized,” Lo said.

“Part of the problem is we want to be more inclusive,” she said.

The group has hosted several dinner events in the Tippie Alumni Center where students can meet with professors who are also first-generation college students. Lo said it is also a good chance for students to get in touch with the right contacts and resources that they can utilize.

“It’s a way for them to find an outside member who can can give them advice they don’t get at home,” she said.

These events often help students find internship opportunities, something Pickering said they might not hear about otherwise.

“I think people who have had family members who have gone to college already have those contacts in place,” Pickering said.

Through his research in psychology, Pickering said he has found that having a support system is extremely beneficial to students. He said being involved in the organization allows him to take action.

“It really is putting into action some of my research,” Pickering said.

In his own experience, Pickering said there were organizations that helped him prepare for and apply to colleges, but nothing to help him once he was enrolled.

“Looking back, I think it would have been interesting…I would have really appreciated that space if it had existed,” he said.

First-generation students tend to find ways of handling their situation and become independent. Unfortunately, Lo said, this means they will often not seek help when they need it.

“Most of them have become so self-sufficient they don’t reach out for help…and we kind of want them to stop doing that,” she said.

Stephanie Carson, ’16, said as the first in her family to attend and graduate from college, she has become independent. She said that it was the small things she did not know coming into college.

Though Carson said she has learned to adjust to college life, partly due to the programs hosted by the new group, asking for help is still difficult at times. Carson said she still prefers to figure things out on her own.

“I have trouble still going to office hours,” she said.

According to Lo in October the group will be hosting an event for first generation students and their families. She said it is important that families understand the college process as well so they know how they can help. Lo said her family never came to campus while she was enrolled.

“For all those four years they never came to campus…they just didn’t know that they were supposed to do those things,” she said.

In addition to its October event, the group, lead by Pickering and Lo, have lunch every Tuesday from 12-1 p.m. outside McKinley’s food court and invite any first generation students to join them.

The group has also created a website where students can view profiles of first generation Allegheny professors and staff. The website is www.sites.google.com/a/allegheny.edu/first-gen/.