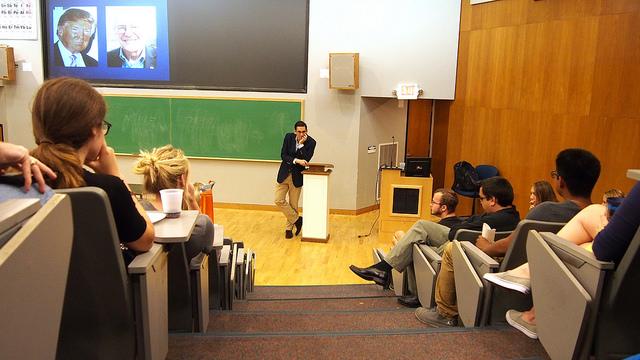 Jon Wiebel, associate professor of communication arts, led the discussion on the populist surge at the Center for Political Participation’s first event of the year, a Quigley town hall meeting on Sept. 10, 2015.

The Center for Political Participation held its first event of the year on Thursday, Sept. 10 in Quigley Auditorium. The event was a discussion led by Assistant Professor of Communication Arts Jon Wiebel on populism in terms of presidential candidates Donald Trump and Bernie Sanders.

“They [the CPP] wanted to talk about what’s being called a populist surge,” Wiebel said.

Wiebel was approached by CPP fellow Haley Riley, ’16, about leading the discussion. She had taken his class on power, politics and communication and thought he would be a good fit as a facilitator.

“We wanted to talk about political populism and Wiebel has a background in communication arts, so he’s probably going to bring in celebrity theory as well,” Riley said.

Wiebel said he did not want to lecture since it did not seem to fit the idea of a town hall meeting, at which he would expect to see various community members participating in a conversation, not being lectured.

“As much as I’m there to facilitate, I’m really interested to hear what others think about these two [Trump and Sanders],” Wiebel said.

Zachary Callen, assistant professor of political science and interim CPP director, agreed with Wiebel that they did not want to be leading the discussion with any one set of ideals, and that the goal is to get students talking and sharing their own perspectives.

“There’s a long history of populism in American politics. I think people are really interested in it,” Callen said.

The idea for the event came from the CPP’s desire to focus on current events and wanting to get people interested in their work.

“It stemmed from us wanting to find things that would get students interested in the CPP,” Riley said.

While for the past two years the CPP has introduced and helped organize many of the events for The Year of Civil Rights and The Year of Voting Rights, both of which were to commemorate the acts that were passed in the 1960s, they will not be organizing The Year of Meadville events. However, they do want to plan some events that coincide with the year’s theme. Callen said they hoped to include both local political issues as well as larger scale ones.

“So far our focus has been on things that have grabbed our attention,” he said.

According to Callen, these events will discuss topics like the populist surge, the immigration crisis in Europe and police brutality. The discussion on police brutality will be held Thursday, Sept. 17.  The last of which they will be holding an event on Sept. 17.

For this event in particular, Wiebel had high hopes.

“I just hope that we have a thoughtful, passionate conversation about the appeal of Trump and Sanders,” he said.

Daniel Litwin, ’17, said he felt the conversation was fruitful.

“We more or less asked questions of each other, debated and answered them. It was largely about Trump and Sanders, however populism plays a key role for them,” Litwin said.

Although Trump and Sanders were the focus of the conversation and debate the issue of their character was never mentioned. Instead, the focus was on how populism has been affecting the United States and what the appeal of each candidate is.

Litwin felt the event was a success and is looking forward to  meetings like it in the future.

“I think this is a great forum for them [community members] to share their ideas,” he said.