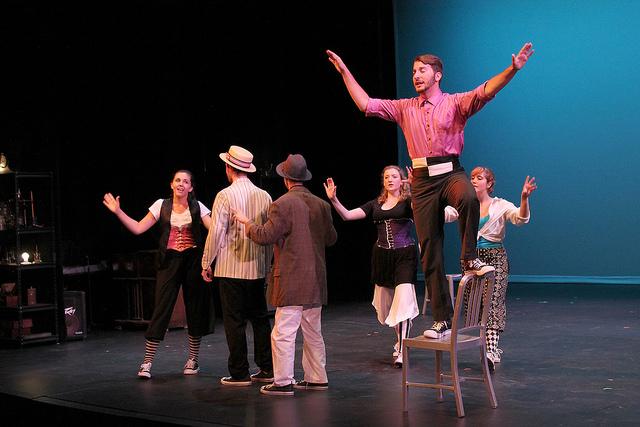 Joe Bruch, ’17, and the other members of the “(Ghost) Light” perform during dress rehearsal on Tuesday, Sept. 8, 2015. The students participating in the show started preparing for it several weeks before the entire student body returned to campus.

The Playshop Theatre celebrated the opening of its 86th season with the stage premiere of “(Ghost) Light” on Thursday, Sept. 10.

Starting with extensive summer research back in fall 2013 the company directed by Beth Watkins, professor for communication arts and theater, created a unique play. Multiple readings and discussing fundamental questions formed a basis for the play.

During the process of covering electricity issues Brian Thumbler and Bob Michel joined to support the company with music, light and lyrics.
The whole play is a portrayal of the development of light and electricity. Engaging popular inventors such as Marie Curie and Thomas Edison, the play tells the story of public electricity progression.

Liz Colarte, ’17, is a theater major and involved in the play. She values the variety of inventors which makes the play a unique and original work. She was asked by Director Beth Watkins to join and stayed because it encouraged her passion for performing on stage even more.

“We touch a lot of different people,” Colarte said. “It’s different to most experiences.”

Coordinating rhythms, actions and words from an individual experience for the spectator with attention to details and fine points the company created the performance.

“I have never done a play like this,” Colarte said.

Nearly three years of research and multiple workshops lead to the release of the final product.

After the research was completed, the actors and actresses went through several workshops to apply to their roles, languages and other techniques shifting the focus from actual research to a theater performance.

Joe Bruch, ’17, majoring in communication arts and member of the cast, is passionate about every detail of the play.

“I am excited to be a part of a play which is completely original,” Bruch said. “There is not a part I don’t like.”

Every member of the company has its own individual and embossing influence on the outcome of the play.

Watkins likes the use of special props such as shadow puppets, costumes and a surprising show of light and darkness throughout the play. Developed from simple research to a creative play Watkins’ favorite part of the process was to find a way making the scientific ideas theatrical.

“‘(Ghost) Light’ is a new display of student’s work that is unlike any other kind of research students have done before,” said Watkins. “It is an interesting way to talk about electricity although it’s not a lab.”

It is an unusual combination of science and theater representing Allegheny College’s values and beliefs, according to Watkins.

“(Ghost) Light” is free for all Allegheny students, $8 for non-Allegheny students, employees and senior citizens and $10 for any others. The company will perform at 8 p.m. on Friday, Sept. 11 and Saturday, Sept. 12 in the Gladys Mullenix Black Theatre in the Vukovich Center for Communication Arts.

“It is unique to Allegheny’s campus” Bruch says. “Come see what the Theatre Department has in common.”