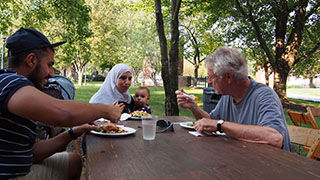 The department of modern and classical languages hosted its welcome-back picnic on Wednesday, Sept. 2. The picnic is an annual catered event for all declared majors and minors in the department. Students can mingle with one another and professors and learn about what is going on in the department for the year.

According to Department Chair and Associate Professor Barbara Riess the number of students registered for language courses at Allegheny has risen to 18.3 percent of the student population (in 2014) since 2002.

As of January 2015 there are 48 students who have declared as a language major and 150 who are minoring in a language. The department offers majors in French, German and Spanish and minors in Chinese, French, German, Latin and Spanish. According to the Modern and Classical Languages website there are also six interdisciplinary minors supported by the department: Chinese studies, classical studies, Asian studies, French studies, German studies and Latin American & Caribbean studies, as well as a separate international studies major. The department also offers classes in Arabic. No Portuguese classes have been offered this year due to a lack of interest last year.

According to Jake Ballinger, ’16 learning a new language can be difficult.

“It’s a physiological struggle and I think also a confidence struggle,” said Ballinger.

Riess said that learning a language offers more than just a line on a resume, particularly in terms of listening critically.

“Being able to sit in an uncomfortable situation and just…listen,” Riess said. “When you’re sitting in a class and you don’t understand what’s going on, it takes a bit of patience, and it takes a bit of courage and bravery to sit through the class, to sift through your notes and figure it out”

The department of modern and classical languages is housed in Ruter Hall. Most classes are held on Monday, Wednesday, Friday, however Riess said learning a language requires daily study.

“In order to learn a foreign language you really have to do daily work, so you have to have a little space carved out daily to keep it in your ear,” Riess said.

For Eli Skelton, ’18 how difficult it is to learn a language varies from person to person.

“It all depends on how much effort you’re willing to put into it,” said Skelton. “It’s all on how your mind works.”

There are various events and opportunities the department supports for students to develop their language abilities both in and out of the classroom. Chinese, French, German and Spanish all have a teaching assistant who works in class with students, hosts language tables every week and lives in their respective language houses with students in the Max Kade International Wing.

Each language house is given a budget and the teaching assistants are responsible for organizing at least two events related to their language and culture. One is often a more language specific event and one is targeted to the broader learning community according to Riess.

As well as the welcome picnic, lunch tables and language house events, the department also organizes two foreign film festivals. One is held in the lobby of the Max Kade International wing, and one in the spring shows contemporary foreign films at the Movies at Meadville. Phi Sigma Iota is the language honor society which holds fundraisers and events throughout the year as well. In spring the department will be hosting the Regional undergraduate conference in Latin American studies.