Professor shares his love for architecture 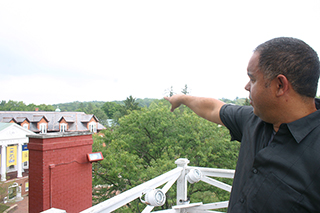 The project seeks to draft blueprints of historic buildings for the public record, which are often used in restoration efforts.

The fall semester will be the program’s fifth, according to Utz. Over the last four semesters, Utz said he and the six to eight students he typically works with have begun to document several buildings on campus including Newton Observatory, Ruter Hall and Bentley Hall.

Despite the progress that has been made, they have only just scratched the surface.

The drafts of Bentley Hall are only 30 percent complete.

Utz said they hope to make more progress on the building this semester by beginning to document the third floor which is currently vacant but once housed the college’s library.

Utz said he hopes by further documenting the condition of the buildings, it will help to draw attention to their needs.

“I think if alumni and trustees knew the condition of some of these things they would want to see their landmark building preserved,” Utz said.

Students who participate in the program, either as a volunteer or an intern, will work closely with Utz in documenting buildings on campus. Utz said this allows students to gain hands-on experience in architecture and engineering even if they have never done anything like it before.

“They have helped with Ruter Hall, Bentley Hall and every semester they work on one specific feature or room,” Utz said.

Though Allegheny does not have an engineering or architecture program, Utz said he feels that students who plan to enter these fields still benefit from their time at Allegheny.

“I like the idea that students are getting this liberal arts education and then going into architecture,” Utz said.

Alexis Preston, ’16, is currently an intern with Utz. She said that her work with Utz has given her skills she plans to take with her to graduate school, where she intends to pursue architectural, structural or civil engineering.

“It has also been very interesting to work in and learn more about the intricate history of Allegheny’s first campus building, Bentley Hall,” Preston said in an email.

Only one student attended the Wednesday meeting, but Utz said that he has several students interested who were unable to make the meeting.

Keith Irvin, ’19, said that he has not ruled out a career in engineering and thought that the program might be beneficial.

“I saw it on the MyAllegheny email and my father is an architect so I thought it might be good to see what the project is about,” Irvin said.
Registration for the internship officially ends on Monday, Sept. 7. Anyone interested in participating should contact Steve Utz at [email protected]