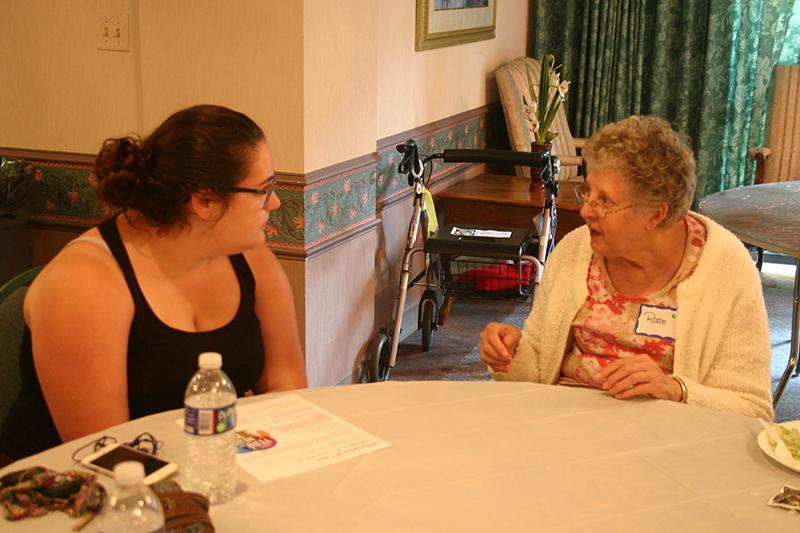 Sydney Fernandez, ’17, is one of the students who participated in the Year of Meadville storytelling workshops and connected with Rosalyn MacGuire, a resident at the retirement home.

The Year of Meadville began with the month of September, starting with workshops over the course of three days.

Each workshop was three hours long and was centered around storytelling. The first was held at Wesbury United Methodist Retirement Community and was titled “Honoring Our History.” The second workshop was at the Arc of Crawford County and was called “Exploring Our Present,” and the third at the Lew Davies Community Center focused on “Envisioning Our Common Future.”

“We want to get people involved,” said Autumn Vogel, ’15. “This is a great way to get to know people where they’re at.”

Vogel is one of four people organizing the Year of Meadville events. She started on June 1 after being informed of the open position while serving as a Allegheny Community Engagement Student Fellow through Civic Engagement.

“It was all the work I wanted to be doing,” she said.

The first day’s event began with an icebreaker and was followed by each person writing a short autobiography to share with the people at their table. The groups were then given two conversational prompts, the first being what brought each person to Meadville and the second being if they could back in time, which period of Meadville’s history would each person go to and why.

Another organizer, Kerstin Martin, who is also director of the Community Wellness Initiative and Allegheny’s Carr garden manager and, was pleased at how the workshops played out.

“There’s a lot of energy around how we want to shape our future,” said Martin.

Martin said she was pleased with the number of students and residents in attendance.

“I think everyone really cares about the community,” she said.

Martin believes that the opportunity to hear residents’ stories and participate in workshops has resulted in an attitude shift among students. She originally heard students saying that they did not have stories about Meadville because they lived on Allegheny’s campus, which they considered separate. She believes that students are now seeing the campus and Meadville as one in the same.

Nandi Ramsey, ’16, attended the event to help with childcare but when only older community members attended, she was able to participate. She said she enjoyed hearing the stories of community members and sharing her own with them.

“I think it was really nice to speak to the older ladies and hear their stories,” she said.

Ramsey connected so well with one of the women at her table that the 95-year-old took her aside and showed her some of her paintings.

“A lot of the residents there [at Wesbury] are from Meadville, so it’s like direct history,” she said.

A few ground rules were established at the opening of the event, such as not to ask questions about what a person chooses to share and not to interrupt. According to Katie Beck, ’14, who was one of the facilitators, the event was operating on challenge by choice, meaning if at any point a person does not want to share they should not feel pressured to.

According to Ramsey, it was a good format for the event.

“The way that they framed the questions and how everything was presented was very inclusive,” she said.

Future events that will be held for the Year of Meadville plan to address heavier issues, such as homelessness, being a bystander, trauma and mental illness. The organizers have involved organizations in the community that work with these issues to help with the events, such as Women’s Services, Inc. and the Crawford County Mental Health Awareness Program.

“One of our goals is to not duplicate anything,” said Vogel.

According to Vogel, they are hoping to utilize the parts of the community that are in place in order to showcase what Meadville already has. She said they are working to become one of the first “trauma-informed communities” in the country, meaning that people in the community are educated on trauma and how to spot signs of it.

“It’s interesting to try to shape a whole year of programming,” said Martin.