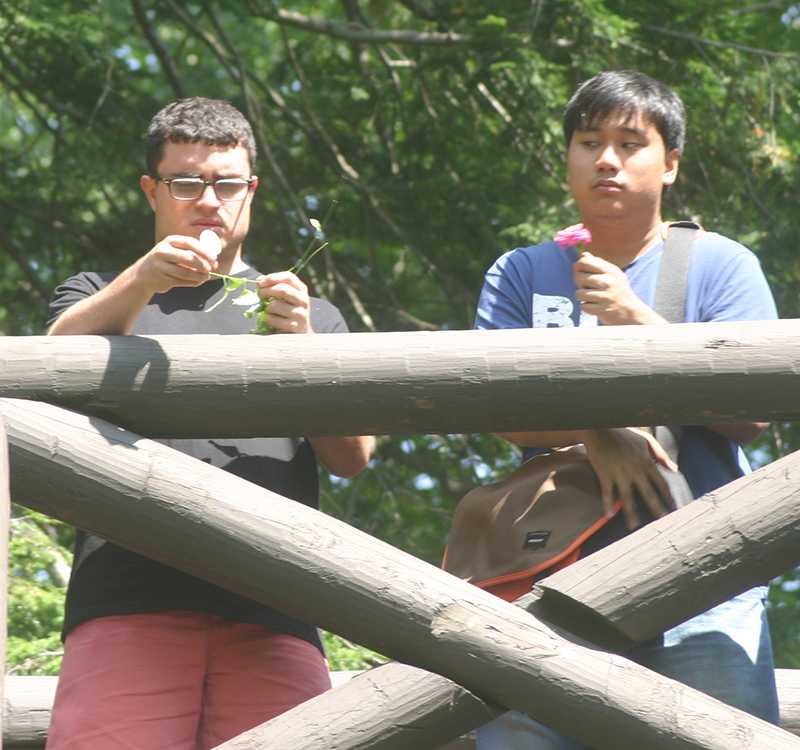 Perry Sisley, ’18, and Emiranzala Kisyanto, ’17, joined others in throwing plants and rocks from the bridge as a returning to the earth ritual to honor Kali Albern, ’17, who passed away in August.

Allegheny held a celebration of life service for Kali Albern, ’17, in Ford Chapel on Saturday, Aug. 29.

Albern had died the previous weekend from unexpected complications following medical evaluations for a chronic illness, according to an email sent out to the school by Chaplain Jane Ellen Nickell on Aug. 21.

“Her parents said she wanted nothing more than to return to school and her many friends here,” Nickell said in the email.

Three of Albern’s cousins attended the service along with numerous friends and others wishing to provide support. One of her cousins, Drew Rotz, spoke on behalf of the rest of her family describing her love of Allegheny.

“You could just tell that it was home for her,” said Rotz.

Rotz relayed a memory of a time he dropped Albern off at the college, saying she was approached and hugged by the first three people they saw.

The family said they are still trying to sort through what happened.

“We’re still kind of in shock of the event,” said Rotz.

Debbie Garrity, another cousin of Albern’s, agreed, saying, “It’s just hard with someone so young.”

Several students worked to conduct the service with Nickell. A friend of Albern’s, Alicia Foster, ’16, said a prayer for her piece that was also written in the pamphlet, giving those in attendance the opportunity to follow along if they chose.

Since Albern was a practicing Wiccan, which is an earth-based religion, the prayer and a short ritual were led by Foster, a fellow Wiccan.

“This is where I set aside my hat as a Christian and remember that I was hired by the college and need to represent all of the students during this loss,” said Nickell.

President of the college James Mullen was also in attendance and said he had met Albern before, having been one of the people who helped her move in her first year. Although Mullen has served as president of the college for eight years and has been to services for students or recent graduates before, he said it is always difficult.

“These are times when we need to come together and be there for each other,” said Mullen. “And I think we need to be sure that we always remember.”

He also said that seeing the students work together through that difficult time is inspiring to him.

“I’m always moved to see students be such a part of this,” he said.

One student who attended, Danielle Flexer, ’17, did not know Albern herself, but said one of her friends did. Although Flexer could not recall ever meeting Albern, she had heard of her.

“I heard that she was a very sweet young lady,” Flexer said.

Flexer said she appreciated that the service was considered a celebration of life.

“To really honor the person, you don’t think of how they died, you remember their life,” she said.

When Mullen spoke at the service, he promised all in attendance that he would always remember Albern, from when he helped her move in to when he attended the service itself.

There was a note-writing section in the back of the chapel to write notes of support to Albern’s parents and make a book of memories. There were also baskets holding rocks or plants that those in attendance could take. These were thrown off the school bridge behind Ford Chapel, returning them to the earth.

Gabriella Belt, ’17, was one of Kali’s friends from Allegheny who spoke. She also shared Albern’s last words to her:

“She told me, ‘I will be back soon enough. Till then, tell everyone how much I love and miss them. Sleep well, my love.’”