The volleyball team kicked off its season will a match against State University of New York at Fredonia, ending with a 3-1 loss.

“We did really well fighting back while we were down and fighting through the end,” said Julia Weeks, ’16.

Weeks had four kills against Fredonia.

“Defense was good and we played with a lot of fight,” Coach Bridget Sheehan said. “There was good energy on the court and the team was excited for the first home match. We stayed aggressive when we needed to but struggled with end of game managing errors.”

The team ended the match with 25 errors to Fredonia’s 34.

When asked how the team can better prepare for the next game, Weeks said they can focus on the mistakes they made against Fredonia.

“I think we learned about what we need to do to win and focus on our errors and intensity level,” Weeks said.

The Gators kept up with the Blue Devils through the third set but fell to them in the final set.

“Fredonia is a good team and stressed our offense a bit,” Sheehan said. “Both teams were going after it and in the last set we played evenly until the end.”

Weeks said the team is working to communicate more and have a faster offense to get more kills.

“We are working to play a more disciplined game, showing energy on the court and being able to manage the game better,” Sheehan said.

Weeks said the first game gives the team a reference point to work from because it shows where weaknesses are on the court.

According to Sheehan, the team will be more focused on what they need to do in the next game and will assess where to get stronger before the next match.

“On Tuesday we started off slow and were quiet, however in practice we’ve been working on communicating more and holding serve,” Bailey Gawley, ’17, said.

The team is looking ahead at the season but also looking back at the game played on Tuesday to see where improvements can be made.

“I am looking forward to seeing everyone improve and the team mesh well and hopefully winning a lot,” Weeks said.

Sheehan said the team had a good return of starters, knows where they were last year and that the focus is to get better this year. Gawley echoed Sheehan’s statement, saying that having returners has allowed the team to build a stable core and develop a stronger chemistry.

“I think this season we’re going to be able to win more games because this team is extremely hardworking and makes volleyball a priority,” Gawley said.

The team will face Waynesburg College on Friday, Sept. 4 in Latrobe, Pa. 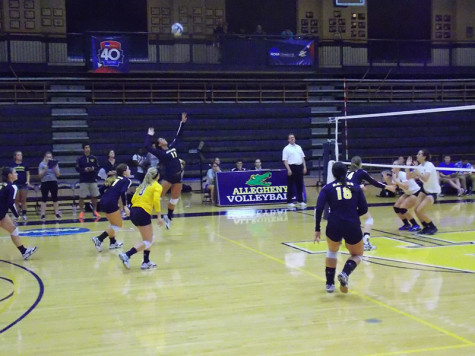 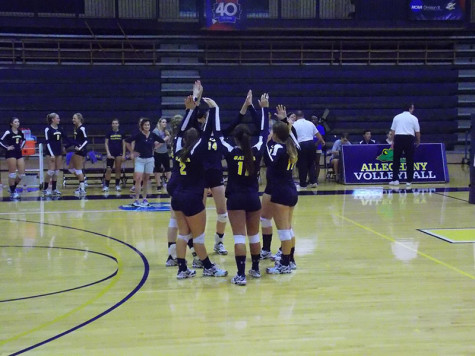 Logan Battin The women’s volleyball team gathers during the match against Fredonia on Tuesday, Sept. 1.