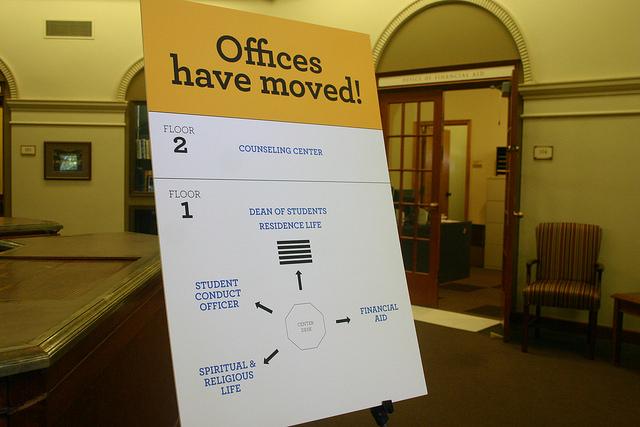 In addition to new signage, the Office of College Relations will have a student in the lobby Reis Hall to direct visitors.

The offices of Student life, Financial Aid and College Relations are in the process of changing locations. The move is an attempt to centralize student services on campus for convenience.

The office of student life is now located in the former Allegheny College Center for Experiential Learning suite in Reis Hall off the main lobby, Financial Aid will be in Reis Hall and college relations will be moving to the third floor of the 454 House in September which was formerly occupied by financial aid.

Plans for the move began in January according to Director of Financial Aid Jonathan Boleratz. He said that the move for financial aid occurred in the second week of August and went without incident.

Boleratz said that he feels the move from the third floor of the Admissions Office to a more central location will make it easier for students to receive the services they need from his office.

“We are trying to get student services offices centralized,” said Boleratz. “It’s to  make it easier on the students.”

Financial aid’s move has been largely completed according to Boleratz. He said this is important as the office’s busiest time is usually when students first return to campus and need to fill out student employment forms.

“Once students arrive on campus we just want students to be able to find us,” he said.

Boleratz said that the office of financial aid has already updated their location on the school’s website and is trying to ensure that all students are made aware of the change.

The Office of Student Life, which includes the dean of students and residence life, will still be in Reis Hall. However, they have moved into the former ACCEL suite off the main lobby. The move began during the third week of July, according to Interim Dean of Students Jacquie Kondrot.

“It took about a day to get everything moved but we are still getting settled,” Kondrot said.

Kondrot said for the first three days in the new space the office did not have telephone service, which was challenging as housing assignments for first-year students had just been announced. She said this is usually a time when the office receives a large number of phone calls from students and parents regarding housing assignments.

Despite the initial challenges, Kondrot said they are thrilled with the new space. She said that she hopes the large lobby space will be a place where students will spend time.

“We welcome people to stop in…we hope we will be an open and welcoming space,” Kondrot said.

Kondrot also said she was impressed with the the work the physical plant did during the move, which included moving more than 2,000 student files which are kept by the dean of students.

The office of college relations has not moved yet but will in September according to Vice-President for Enrollment and College Relations Brian Dalton.

“The plan is for them to move by the third week of September,” Dalton said.

“They put up offices that can easily be reconstrued,” Dalton said.

Kondrot said that one of their long-term goals is to move the financial services office from Schultz Hall to a more centralized location on campus.

Admissions will remain on the first and second floors of the 454 House on North Main Street. Spiritual and religious life, the student conduct officer and the counseling center will remain in the same locations in Reis Hall. According to the office of college relations, a student will also be at the main desk in Reis to direct anyone who needs assistance finding a specific office.