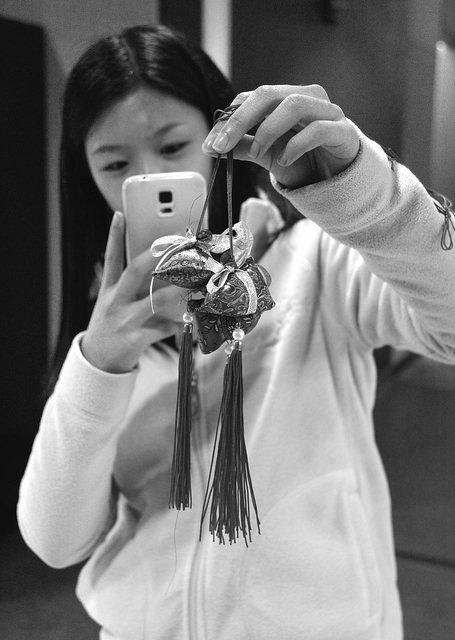 Lynn Lim, ‘15, president of A5, takes a picture of sachets made by students who participated the Dragon Boat Festival on Thursday, April 16.

The Department of Modern and Classical Languages and the Association for Asian and Asian American Awareness hosted a Dragon Boat Festival in the lobby of North Village C on Thursday April 16, 2015.

The festival is celebrated across China and some other Asian countries. Dragon boat festivals often include dragon boat races on lakes and rivers as a form of reenacting the frantic search for Qu Yuan’s body.

Qu Yuan was a poet and diplomat who drowned himself in the Miluo River as a form of protest.

Traditionally the Dragon Boat Festival is celebrated on Tuan Wu, or Double Fifth Day, which falls on the fifth day of the fifth month in the lunar calendar.

“We brought it forward so it could be during the academic year and the Asian Month,” said Lynn Lim, president of A5.

The celebration was put on at Allegheny as one of the seven events hosted by A5 during April’s Asian Month celebration. This is the first year that this event has been hosted at Allegheny.

At the festival, Yuchun Huang, Chinese teaching assistant, presented to the attendees about the history behind the festival.

Walter Stover, ’17, read poems written by Qu Yuan in Chinese. Guests were then encouraged and coached by Huang to make their own sachets using Chinese scents.

The sachets are dumpling shaped and made of cloth. Inside there is cotton which has been infused with scents which gives the whole sachet a light and relaxing smell. These sachets can be hung up or even worn on necks and wrists.

She also participated in making the sachets during the festival.

Ethan Radovich, ’15, is in his third semester studying Chinese language. He also made his own sachet during the festival.

“Learning about different languages would broaden your horizon,” said  Radovich, “And it is interesting to learn about cultures and histories.”

A5 will be hosting Mahjong in Grounds for Change (GFC) this Friday at 7:30 p.m. and will also be hosting henna in GFC on April 22.

Reporting for this event was also done by Yutong Wang. Her work contributed to the publication of this piece.