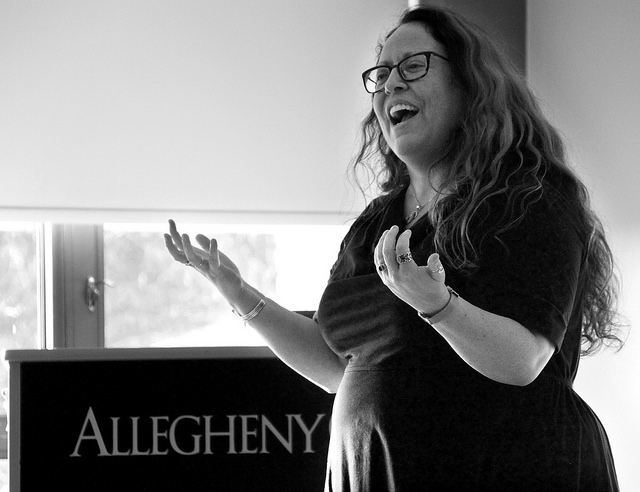 M. Soledad Caballero, associate professor of English, spoke to students, faculty and members of the Meadville community about conceptualizations of masculinity and the dynamics between Britain and South America in the Campus Center on April 15, 2015.

Soledad Caballero, an associate professor of English, held a faculty talk on Wed. April, 15 in the Campus Center to talk about the conceptualizations of masculinity and dynamics between Britain and South America.

This presentation was a part of the Karl W. Weiss ’87 Faculty Lecture Series. The title of the talk was “Transatlantic Masculinities: Travel Narratives and Models of Military Leadership in the South American Wars of Independence.”

Manuel Marquez, ’16, will be doing research with Caballero this summer and wanted to see her present.  He also has an interest in Latin America.

“I’m really interested in separate cultures that we see intermingle so I think it is really cool to see really how Britain has influenced South America,” Marquez said.  “It was really interesting.”

“Professor Caballero’s talk was both intriguing and engaging. I think it’s important for students to catch a glimpse of what their professors are doing outside of the classroom,” Zahren said.

“Academia is bustling with excitement, and I think that’s apparent from the Q&A after her lecture.”

According to the official press release for the event, Caballero considers what ideas the British brought with them when they traveled to South America in 1817 including ideas about glory, war and masculinity.