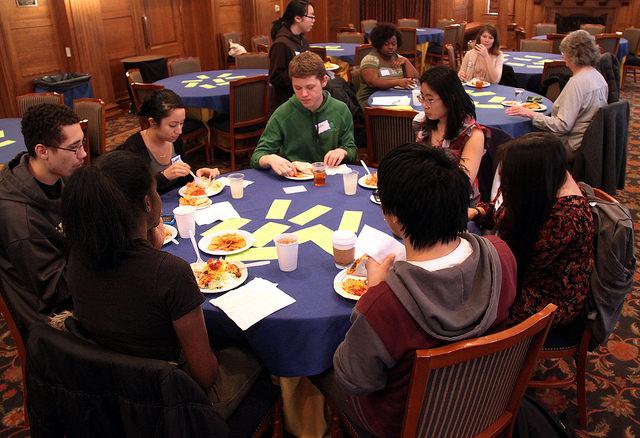 Students who participated in the First-Generation Group Kickoff Dinner get the opportunity to talk about their experiences, using the discussion cards.

The First-Generation Group Kickoff Dinner was held yesterday, April 16 in the Tillotson Room in the Tippie Alumni Center, for students, staff and faculty interested in listening to and sharing first-generation student accounts. Aline Lo, assistant professor of English, and Ryan Pickering, assistant professor of psychology, began the discussion of creating a space for first-generation students earlier in the year.

“[Pickering] and I are both new faculty together and we were talking about our own experiences in graduate school and how much of that stemmed from our background as first-generation students and how things kind of followed us from our college years,” Lo said. “First the idea was ‘Hey, let’s just meet with faculty who were also first-generation students and see if they had similar issues,’ and the more we thought about it, the more we thought, ‘Wouldn’t it be helpful if we started something for the students at Allegheny?’”

With the help of students, Lo and Pickering were able to further their initial discussions into something more tangible for the Allegheny community. The first, school-sponsored event was a Gator Day panel, funded by the Diversity Innovation Funds and their second event was last night’s dinner.

Meghan Murphy, ’15, is a first-generation student and was involved in planning the kickoff dinner.

“I’m a student liaison between Ryan and Aline and the student population,” said Murphy. “I did mostly PR for the event…The dinner is kind of a conversation to help students going through the struggles. It’s a safe place to meet, to not feel judged.”

Lo and Pickering both saw the dinner as an important starting point for further discussions on first-generation students.

“We didn’t want to create something that wasn’t going to be helpful and that didn’t have the input of a lot of individuals,” Lo said. “So, we’re waiting for the dinner to see what kind of organization can spring up and what kind of programming we can have here.”

Pickering mentioned that it is up to the students if they want more done on campus with the subject, whether by establishing a group, having mentors, ultimately being up to student opinion.

“I’m doing research in social class so I was more aware of it than maybe other people were, but there were experiences I had that made it very aware that the reason I felt isolated was because I couldn’t afford to do the things that other graduate students were doing,” Pickering said.

Lo experienced a similar feeling of isolation when she left home to attend Colorado State University for her undergraduate degree. She later attended the University of Wisconsin-Madison for her masters and doctorate degrees.

“I thought I knew what college was going to be and I really had no idea,” Lo said. “…I knew there was this idea of what the college experience should be, but I just didn’t know how to do it. I went to a big state school where you really had to work hard to find the right resources. It really took me so much longer to do the things I saw my peers doing.”

For Lo, moving that hour away from home to attend CSU was a big step.

“My parents did not go to college or to high school,” Lo said. “They were refugees, so their lives were just kind of thrown into chaos when they were teenagers, so this was kind of the peak time for them to be really learning. By the time they got settled, they were a little too old to go back to high school or college. Their big concern was getting a job and having kids.”

Following successful paths in education, Lo and Pickering both found themselves teaching at Allegheny College for the first time this year. After discussing their experiences with education, it became a matter of importance for them to establish some type of available resource for first-generation students to ‘even the playing field,’ as Pickering mentioned.

“We’re trying to be flexible about what it means to be first generation,” Lo said. “I think the traditional definition is the first among your generation to obtain a college degree…I don’t want students to question whether or not they count. If they think it’s helpful and they feel like they fit in, they should come.”

Currently the pair are working to create an online presence.