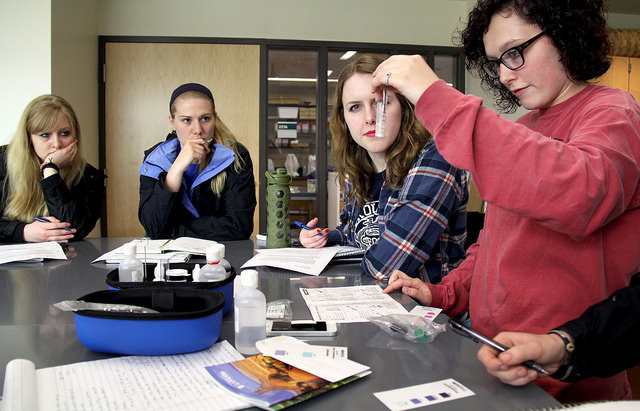 In a list of Top Environmental Science Schools, published by environmentalscience.org, Allegheny College was ranked second out of 50 schools and universities. The list recognized Allegheny as a best college for advocating environmental science and studies.

This list included only four-year, public and private U.S. colleges with more than 1,000 total students and at least 10 ES majors and focused on factors such as location, faculty, opportunities abroad, program depth and research.

Eric Pallant, professor and chair of the ES department, is not surprised by the award and said that the department appreciates being acknowledged by a national organization.

“We rank very high and I can speak from experience—I do a considerable number of external reviews of other ES programs and when I go to national conferences—we are the envy of every other liberal arts college for the breadth and depth of our faculty, how many professors we have in ES and how many different things they cover,” Pallant said. “We’re thrilled and delighted and pleased to get the recognition that I think a lot of us think is deserved.”

Even among the Allegheny student body, ES is one of the more popular majors, alongside biology, psychology and economics. According to Ann Sheffield, Allegheny registrar and associate dean, there are tentatively 24 environmental science and 24 environmental studies majors, which is approximately 11 percent of the graduating population.

Among the department’s strengths are the independence and dedication of the ES staff whereas other schools often have ES departments composed of biology, chemistry and geology professors, according to Ben Haywood, visiting assistant professor of ES, who interviewed nationwide before choosing Allegheny at the start of the ’14-’15 academic year.

“We have a really impressive, especially given the size of our school, an impressive cohort of faculty in the department that range in expertise from streams and fish to forests and bugs and…food and tourism and ecotourism,” Haywood said. “All these things that we can kind of pull from so I think that’s one of the really strong aspects of this school is that we do have a dedicated department that’s independent of other departments.”

In addition, both Haywood and Pallant believe the experiential learning component of the department enables students to become stronger critical thinkers, which will only help with the problem-solving mindset required by real-world environmental issues.

Owen Ludwig, ’18, who has already declared an environmental science major, said that he enjoys the hands-on nature of the overall ES curriculum.

Ludwig is currently taking ES 210: Environmental Research Methods, which is primarily focused on solving these real-world problems. According to him, there have been two major class projects, one of which quantifies and assesses the quality of the Wise Center’s recycling system. The other project addresses a potential invasive insect species, hemlock woolly adelgid, which may affect the soil composition of the Bousson experimental forest if the Hemlock tree population is impacted.

Outside of the classroom, the department hopes to provide opportunities that will strengthen the hands-on style of learning. Haywood specifically sees strength in study abroad, internship and community involvement opportunities.

“A big focus for us is not only what students do in the classroom but what they do out of the classroom: making sure that students have summer internships, summer REU [research experience for undergraduate] experiences…,” Haywood said. “In many ways, for students that are going to work in environmental non-profits or organizations that do real on-the-ground advocacy or research, those kinds of experiences are even more beneficial than what happens in the classroom.”

The department does have plans for improvement including further diversification of both faculty and student populations in what has traditionally been considered a white, male-dominated discipline, according to Pallant.

“That may sound obvious to you but environmentalism has long been a bastion of elite, white, wealthy participants,” he said. “We would very much like to see a department with majors and faculty who are considerably more diverse and…more interactive between different groups of people to solve environmental problems.”

Haywood, upon finishing his first year at Allegheny, foresees the strength of program continuing beyond this award.

“I think, now that I’m wrapping up the first year, I’m not surprised at all that we are ranked so highly nationally and I say that just coming from a place where I was looking across the U.S. at different schools and different programs,” he said. “I see the strengths of the department are integral to who we are here. The challenge is going to be…making sure we’re really connecting to the community…There’s a strong dedication among the faculty in the department to do that and so, it would not surprise me if we continue to rank very highly nationally.”