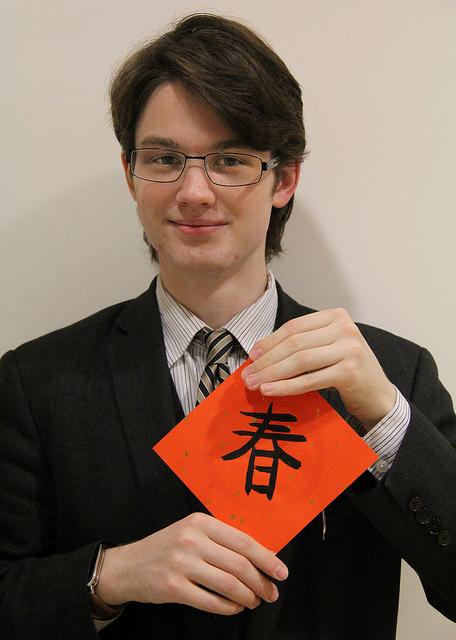 Walter Stover has been awarded the Critical Languages Scholarship that will allow him to study in Beijing.

Walter Stover, ’17, will be spending eight weeks of the summer of 2015 in Beijing doing intensive language studies after winning the highly selective Critical Languages Scholarship from the U.S. State Department.

Stover has had an interest in Chinese language and culture since he was 11 years old, when he read “The Romance of Three Kingdoms,” a historical novel set near the end of the Han Dynasty in China. After reading the novel, Stover became invested in classical China in particular.

When Stover began high school, he was required to take a language and decided to take Chinese because of this cultural interest.

“It’s a very transnational kind of place,” he said.

Stover was initially encouraged not to bother applying for the scholarship from the State Department because of the high likelihood of him not being chosen. He was instead advised to bide his time, build up more experience, and apply the summer before his senior year of college, as most students do.

Although this kind of work in advance is unusual, Jackson wishes more students came to him early on with their ideas in mind in order to stay caught up.

“Applying for a fellowship is not something you wake up one morning and kind of decided to do, like, that week,” Jackson said.

Although he has already been awarded the scholarship and assigned to the Beijing area of the language studies scholarship program, he is still filling out the numerous amounts of paperwork needed for him to travel and study abroad, of which Jackson has also helped him with.

Stover has never traveled out of the country, so Xiaoling Shi, assistant professor of modern and classical languages, has been aiding Stover on what to expect culturally and how to prepare.

A letter of recommendation for Shi was critical to Stover’s acceptance to the program, since she is the one who confirmed that his language skills are proficient enough for him to succeed there.

Shi has similar opinions to Jackson in that she believes it is key for students to get an idea of what they want to start doing ahead of time, and respects Stover for doing so.

According to Shi, Stover is devoted to the language of Chinese and does extensive work inside and outside of the classroom, which is what gave him such an advantage.

Because of his lack of experience traveling out of country, Stover has experienced some nervousness about the potential of culture shock.

“It’s gonna be terrifying,” he said.

Despite Stover’s apprehensions, Shi is confident that he will have no trouble there.

“I think they will be very well taken care of in China,” she said.

Stover loves big cities, having spent some time living in Los Angeles, Calif., and has plans for branching out of his comfort zone by not staying in his host family’s home too often.

“I want to be studying in a cafe or restaurant somewhere,” he said.

As time goes on, Stover plans on traveling farther from his host family’s home to see as much as her can.

“I want to make the most out of this opportunity as possible,” he said.

After finishing this summer program, Stover intends to apply for the Borne Scholarship, which would allow him to spend a year doing research in China. In the future, he plans on using his bilingual capabilities to work in international law.