Student athletes recognize DIII Week as a celebration of athletics 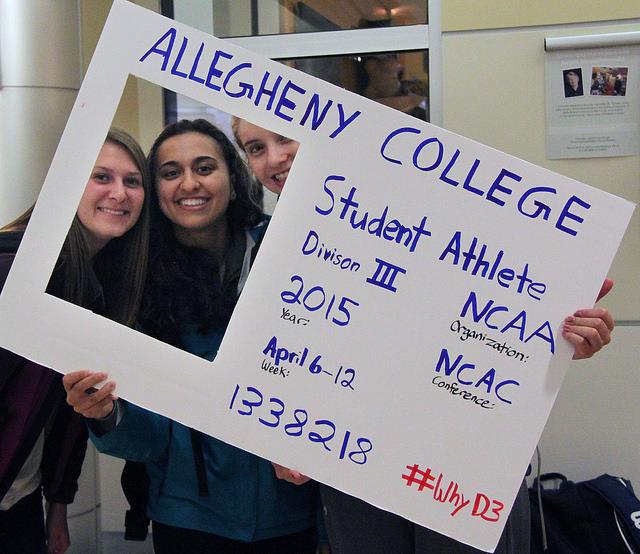 Kirstie Oravec, ’16, Mikaela Pope, ’17, and Andrea Brush, ’16, took a picture together as part of DIII Week. This week was to recognize student athletes at D III schools.

Allegheny celebrated Division III Week from April 6-10 and recognized the students involved in the variety sports on campus.

“DIII week is a relatively new, nationwide week to encourage students not going DI or DII that DIII is still an option and a good one. We are still varsity athletes and embody the morals of student athletes,” Christina Perez, ’16, said.

Student-athletes at DIII schools work hard in the classroom and on the field or court, but do not always receive recognition in the ways DI or II athletes do.

“It’s important because it’s who we are as an institution. DI schools receive attention but DIII athletes work just as hard. It is a week to show acknowledgement for DIII athletes,” Portia Hoeg, director of athletics, said.

Patrick Orr, ’17, said student athletes have a challenging time navigating class and athletics when school comes first, especially at a school like Allegheny where most students are engaged in multiple extracurriculars and work extremely hard to improve in the sport they enjoy playing.

“Allegheny has a very intensive curriculum so I think it’s beneficial for sports because the effort we have to display in the classroom teaches us what it takes to be successful,” Orr said. “Also the professors here are very understanding when there are conflicts and it’s not uncommon to see professors at games, or have them comment on games in class which shows that they support our athletes and teams.”

DIII Week is a time for the campus community to recognize what students athletes are doing.

“It puts into perspective that we are students going to tough schools and still playing sports while also in sororities or service groups and more,” Perez said.

Hoeg said in a DIII program there is freedom to participate in other things and discover your passions.

“Given the sheer number of programs there is more opportunity to compete at a DIII school. You can participate in a sport you love and receive a quality education,” Hoeg said.

Many student-athletes choose schools with DIII programs to excellence in the classroom and still be able to compete in the sports they love.

“I was looking for a small liberal arts school with a lacrosse program, I came to campus and loved the atmosphere and the athletic department is really helpful for athletics and academics, and I wanted to get both,” Perez said.

When Hoeg was in college, she competed in women’s basketball at the DIII level.

The NCAC conference hosted a penny wars competition for The Cure Starts Now, an organization started by DIII basketball player Lauren Hill who was diagnosed with a terminal brain tumor in 2014 and passed away on Friday.

Wednesday was “bring your coach to class day” for student-athletes across campus.

“The coaches know their athletes are students but this day put in perspective how far students are going in the classroom,” Perez said.

Orr said teams also had an opportunity to have a honorary coach, where athletes could ask a professor to come to a game and be an honorary coach on their team.

Friday student athletes closed the week by wearing team gear and representing the community within Allegheny.

All week long the Student Athlete Advisory Committee (SAAC) hosted a social media challenge. SAAC took pictures of student-athletes and had students post them to their Instagram and Facebook profiles with a caption of why they choose to go DIII.