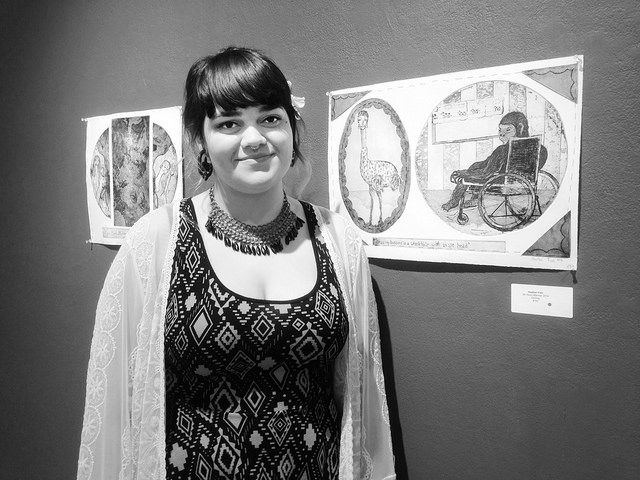 Students were awarded for their artwork during the opening reception of the annual student art show at Allegheny College’s Bowman, Penelec and Megahan Art Galleries on March 31. Juror’s Prize, Doane Prizes in Art and Purchase Awards were awards to the winning students.

Heather Fish, ’15, submitted four etchings for the show as a series of artwork, and was awarded Juror’s Prize and First Place in Graphics for three of her etchings that entered the show. She also received a purchase award from the art department for one of her three entries.

Named “War at Home,” Fish’s work was based on her working experience at the local women’s services center in Meadville. Fish has been working there since her freshmen year, and has been working closely with the domestic violence counseling group since this year. Through this artwork, Fish hopes to display the types of characters she works with.

“It’s really interesting the way they heal or the way this counseling group functions and communicates,” said Fish. “I think it’s not like what people expect, and I just wanted to visually create the personalities of that group.”

As an art minor, Fish has been submitting works every year, but this year is her first time got entered in the show.

“I have gotten better and I think the fact that I really take my work seriously has really shown,” said Fish. “It was good to finally feel like I actually made really good prints that other people would appreciate, the outside of the printmaking community.”

Sun Mo Koo, ’16, got in the show with three of her five submissions. She also received Doane Prize in Sculpture and Ceramics and a Purchase Award from the art department for one of her art pieces.

Koo submitted a series of traditional Korean paper cut boxes, with each box having a different scene to a story.

“My concept for this series was to emphasize the importance of the preservation of dreams and imagination,” said Koo. “I want my viewers to look at my imagination. Hopefully this project was good enough for people to visually see what I was thinking about and what I came up with.”

Koo is an art major and this is her first time getting award.

“I wasn’t expecting much really, I just wanted to see where this took me. And it went far beyond what I expected,” said Koo.

Amara Geffen, professor of art, believes the show was very strong this year, even though she was surprised that not more students submitted their work. She explained how entered work was selected.

“We have criteria for the award. We look for a body of work. So we look for students who have done the most ambitious, the most sophisticated, the most interesting, the most well-crafted depending on their solution,” said Geffen. “Whether we are teachers or whether we are art viewers, we look for the works that show the most effort, commitment, creativity, care, content, sophistication, etcetera.”

The content of student artwork changes every year. According to Professor Geffen, over the course of the last three years, there has been more ceramics and sculpture entered in the show.

“I think in the past several years, there’s been more printmaking, more drawing, more computer generated imagery than there was this year,” said Geffen.

As the professor for art and the environment, ceramics and sculpture, she helps students to submit their work.

“We encourage students to talk to us if they are thinking about entering, so we can coach them on a development the best body of work,” said Geffen. “I would like to see the students get more involved.”