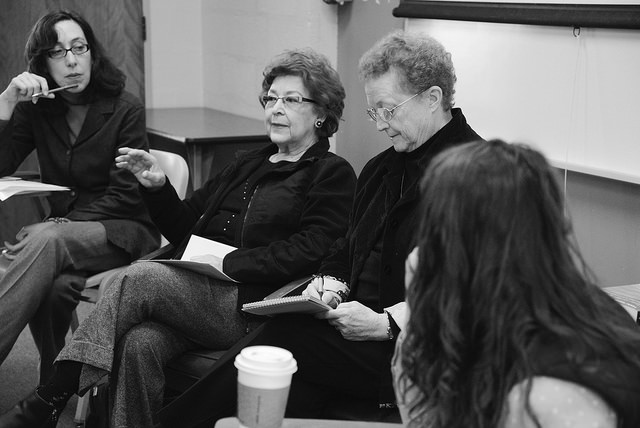 Award-winning translator María Roof, ’67, and Nicaraguan poet Vidaluz Meneses presented a lecture on “Transnation  Translation: From the Tower of Babel to Internationalizing Poetry” in Pelletier Library on Tuesday, Feb. 24. The audience included staff, faculty, and students with interests in translation, languages, and cross culture communication.

The Tower of Babel is a story in the book of Genesis that explains the origin of different languages. In the story, God created various languages to prevent humans from communicating with each other and to insure that humans would not work together to build the tower, whose top reached to heaven.

According to Roof, in order to not be offensive in cross cultural communication, people need to pay attention to their language and know about the audience of who they are talking to.

Rodolpho Camargo, a Portuguese teaching assistant from Brazil, attended the lecture because of his interests in translation.

Having a college degree in translation studies from Universidade Sagrado Coração, Camargo once worked as a translator for research, audio, video, subtitles, games and websites. He found the beginning of the lecture very similar to classes he took in college.

“It was interesting to see there are similar difficulties of translation from English to Spanish,” said Camargo. “Poetry is a different perspective from what I used to work on. Poetry translation is the most difficult because you have to be very creative and have deep understanding for the poetry.”

Vidaluz and Roof also attended two of political science professor Shannan Mattiace’s classes, U.S. and Latin-American Relations and Government/Politics of Latin America. They interacted with students and listened to a presentation that the Latin-American relations class made about Nicaragua.

“We happened to be talking about the Sandinista Revolution that day and here we have a high ranking member of the Sandinista government, acting Vice Minister of Culture. So who better to detail the internal working than someone who supported the movement before 1979 and then became part of the government,” Mattiace said.

Besides being a graduate of Allegheny College, Roof taught at Allegheny for ten years before moving to Howard University to work as an associate professor and graduate faculty in the department of world languages and cultures.

Roof is still involved with Allegheny College and keeps in contact with students she taught.

Roof said Allegheny is special because students do senior thesis on their favorite topics, topics that they are still communicating years after graduation.

“This is the best part of university education,” Roof said.

Following the lecture, there was a reception for the audience to ask questions and talk with guest speakers.

Roof and Meneses also joined a poetry reading in Grounds for Change, hosted by Department of Modern and Classical Languages on Wednesday, Feb. 25.